Home » English » Americans in Nijmegen: ‘I am pretty nervous about election night’

Americans in Nijmegen: ‘I am pretty nervous about election night’

Will it be four more years of Donald Trump? Or does his opponent Joe Biden win the United States elections tonight? Three American students and employees at Radboud University talk about the election in their home country.

‘I live in Nijmegen, I study here and my boyfriend is Dutch. But I went to the US this week to see my family, and the elections were another big reason. Flights are also very cheap right now, because of the corona crisis. So I can vote in the US this year. If that wasn’t the case, I would have gone to a polling station in Amsterdam. The elections before this one, four years ago, I was in Cambodia. They did not have any polling places, so I had to fill in a long form, take that to the embassy and vote by mail.

‘I am around 80 percent sure of who I am going to vote for. I’d rather not say who exactly, because I am still doubting, it is a hard choice to make. In our bipartisan system, you have to pick a side. Personally, I would prefer to vote for a third party. There are other candidates than Biden and Trump, but they don’t get to participate in the debates and are not very visible. So they will probably not win. But both Trump and Biden have ideals that I don’t really align with. I come from a very conservative state, Missouri. It’s important for me to vote, every vote counts, and coming from a very right-winged district, I want to let my voice be heard too. I am very anxious to see what is going to happen, it is not a good feeling. Especially now with the virus, we have to have the right person in office.

‘For me, the topic of gay marriage is a very important one. You might have heard that our Supreme Court judge Ruth Bader Ginsberg died, and she worked very hard to help women and gay people. As a woman from the US, I want the best for myself and other women. I also have a focus on immigration laws and how those are handled. When I talk to Dutch people about the elections, there are two things I find that are unknown to them. First of all, we have a lot of voter suppression. People always say: “your turnout is so low, that doesn’t help”. It is not as easy to vote in the US as it is in The Netherlands. You have to be registered, you cannot have a felony on your record, and voting from abroad is very hard. The second thing is that we were never supposed to have just two parties, it wasn’t set up like that, originally. The government has exploited voters, they only gave them two options. That’s how we got this bad, divided political climate.’

‘Last Wednesday, I turned in my absentee ballot. This means I voted by mail. I wasn’t registered, apparently, so I first had to fix that and then they sent me the ballot. You did get a four-page instruction manual, and a key code, and all kinds of documents. But it worked out in the end. 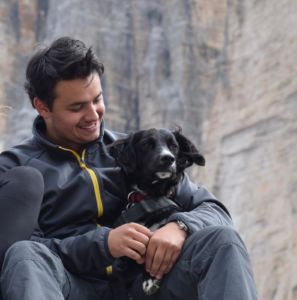 ‘I am a registered republican. During the last elections, four years ago, I was 17. I did already have an opinion and thought Trump was better. This time, I voted for the Libertarian Party. My vote was based on the party, not the candidate. The Libertarian Party is the less-republican republican party, I see myself as a republican without all the Christian parts of it. The two candidates for the big parties are not the best, to be honest. First, I thought I would vote for Biden, but I backtracked on that when the campaign started. For me, foreign policy, economics, and equality are important. I just didn’t feel like I could knowingly vote for Trump this time, given how America looks right now. It’s more separated than ever, it hasn’t been this bad since the civil war. And since I am from New York State, a vote for a republican also doesn’t really count, because in my state the democrats always win.

‘As simple as the choice between two candidates might look from the outside, it’s a difficult decision to make nonetheless. When I talk to Dutch people about this, I try to show them arguments for both sides. Even though I don’t agree with everything Trump does, as a patriotic American I feel that it’s important to respect the person in office. And he did do a lot of good things too. I hate it when people say “vote out the orange buffoon”. It’s disrespectful and unfair. Dutch people mostly see the social side of what he does, not the economic side. I try to follow the news from different newspapers and I try to watch the debates, however painful they are. On social media, I have friends from both sides, which is very important to me. I respect everyone’s opinion, but I don’t really get involved in discussions. A lot of terrible things are being said, from both sides. I often am in the middle. For example, I am not a gun owner but I do support the second amendment.

‘I feel pretty reserved about tomorrow. If Biden wins, I don’t care, he ran a good campaign and I am fine with that. If Trump wins, I also don’t mind. There is still a lot that he can do well, he has done good things. He improved employment numbers under all Americans, he defeated ISIS, and established tax cuts and reforms that helped businesses. Credit where credit’s due. And in four years, we will hopefully have two good candidates again. I see this as a placeholder election.’

James Trujillo,  Junior researcher at the Donders Institute for Brain, Cognition and Behaviour

‘I did vote, by mail actually. I sent in my vote as soon as absentee voting was open for my home state, making sure the letter had plenty of time to arrive. I feel pretty comfortable about the mail-in vote option, Trump’s claims about voting by mail being fraudulent simply aren’t founded.’ 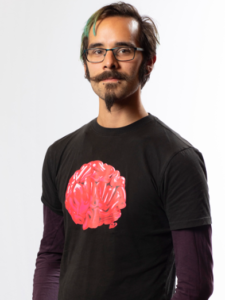 ‘I voted for Biden, even though he was not my first pick. I was hoping for Bernie Sanders or Elizabeth Warren, just like many other people who vote for the Democrats. But after seeing how much Trump has done to sow distrust and division within the US, I think Biden will at least contribute to repairing some of that damage. The US are in a really bad situation right now and it is just getting worse. Under Trump, the country has become even more divided, and is moving towards being more self-centered and self-serving. Four more years of this will put us in a place we can’t get back out of as one united country. That is why I hope that Biden will win. But I do know there is a realistic chance Trump will win again, since those who still support Trump are more passionate than ever. Of course, regardless of who wins, there’s also the very real possibility of more riots – or worse – from the losing side. So regardless of the outcome, I am pretty nervous about election night.’

‘One of the biggest things that people tend to not realize, or not fully understand, is how engrained the two-party system is into our culture. You typically grow up as either a Republican or Democrat, everyone on the other side is stupid or crazy. It’s almost religious for many people. Some important consequences of this are that it becomes very difficult to have any reasonable debate or for people to really see the perspective of the other party. And that goes both ways. This is different from Dutch politics where, even though there can be some heated debate, the fact that there are so many parties leaves you a lot more room for more subtle differences. I think this really helps to not get stuck in such a hard Left versus Right debate.’

‘That is also the reason why I only follow the news on a not-daily basis and just watch the highlights from the debates, to keep up with what the candidates are doing. However I purposely do not follow the polls and I stay absent from social media during election time. So much of what happens around the elections is just about the Left and the Right pointing fingers and arguing about which side is right, and which side is evil. At best it is not informative, at worst it is just shameful.’