Home » English » Back to Heumensoord

While living at Heumensoord, Hruy Weldemichael Tadiyos used to attend lectures at Radboud University and write Vox columns under the pen-name Biniam. A year later he has his own house in Amsterdam. Vox paid him a visit and took him back to Heumensoord. ‘I have a lot of fond memories.’

Prefer to read this story in Dutch? Click here.

A woman on a cargo bike struggles against the wind while in the distance a dog chases a stick. Apart from the whistling wind, all is quiet. Hruy Weldemichael Tadiyos (28) strolls across the open sands of Heumensoord. ‘I didn’t expect this. There’s nothing left of the camp.’ An old tree juts out in the middle of the field. ‘I never even noticed it. And now it’s suddenly here.’ He takes some pictures with his phone; he has to show this to his Heumensoord friends.

A year ago, at this exact spot, Weldemichael – a native of Eritrea – stepped off the bus. He was among the first batch of Heumensoord residents to be warmly welcomed by Nijmegen locals with banners that read: Welcome refugees! Together with three thousand other refugees, he made his way to his makeshift home in the forests of Nijmegen, at the height of the refugee influx. ‘Green Village’ was the section of the camp he called home. ‘My tent would have been right about here.’ He strides across the sand.

As the camp became better established and winter came around, many refugees took to the streets in protest. Conditions in the largest refugee camp of the Netherlands were far from ideal. Some even said inhumane. Weldemichael didn’t complain, even though the chilly Dutch air took some getting used to. ‘I have a lot of fond memories of that time. I met many people and made lots of friends.’ 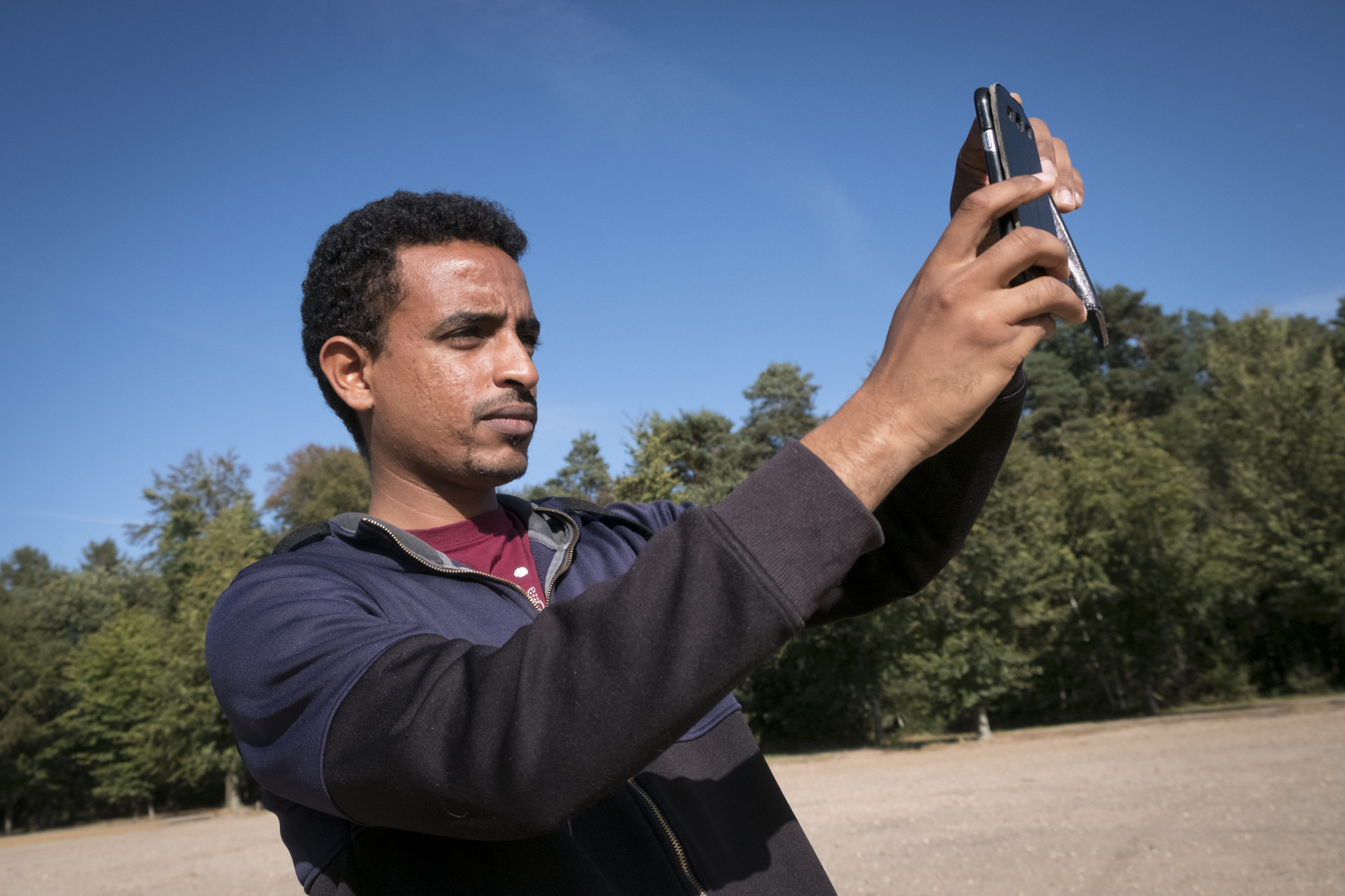 Nijmegen kept its promise – many of the refugees really did feel welcome. Every day people would come to the gates to bring coffee, play with the children, or stop for a chat. The University also opened its doors to the refugees, offering them free language courses on campus and access to the library computers.

Weldemichael took geography classes. ‘It was a welcome distraction from my life at Heumensoord. There was nothing to do there.’ He also wrote columns for Vox under the pseudonym Biniam, giving readers a glimpse into life at Heumensoord. Until November, that is, when the Central Agency for the Reception of Asylum Seekers (COA) notified him that his application was being processed. The next morning Weldemichael was on a bus to Ter Apel.

From Asmara to Amsterdam: Weldemichael’s journey

The very first border Hruy Weldemichael had to cross was already dangerous. ‘If the government gets you, you can end up in jail for years.’ Weldemichael fled the military dictatorship in his home country of Eritrea. ‘Everyone has to join the military. But you never know whether you’ll get out alive.’

He travelled through Sudan and the Sahara to Libya, where he encountered the most terrifying leg of his journey. ‘We were kidnapped near Tripoli. They took us to a house that was still being built. It didn’t even have a roof. We were there for a month, kept awake at night by the sounds of war outside. It was terrifying, but at least we didn’t end up in the hands of Isis. We would have been dead for sure.’

The kidnappers hoped to profit from the influx of refugees. ‘Our only option was to pay them a huge ransom to buy a boat and sail to Italy.’ After Weldemichael’s family had deposited money into the kidnappers’ account, he was put on a wooden boat with four hundred other refugees. ‘We were packed in like sardines. After about ten hours at sea, we were picked up by the Italian navy.’ In August 2015, Weldemichael finally set foot on European soil.

Despite being rescued by the Italian navy, Weldemichael couldn’t wait to leave the Italian camp. ‘I always thought I’d go to England or the Netherlands, because family reunification procedures are much faster there.’ He hopes that his wife, who stayed in Asmara, can join him soon.

Weldemichael ended up in Rotterdam via Milan and Munich. The Rotterdam police bought him a train ticket to the asylum seekers centre in Ter Apel. Due to the many asylum requests in 2015, Weldemichael’s application was not processed immediately. He was taken to Heumensoord after spending two weeks in Middelburg. Once his asylum application was approved, he spent several months in the asylum seekers centre in Almere until a house became available in Amsterdam.

Vogelbuurt
In the Vogelbuurt in North Amsterdam, a group of pre-schoolers follow their teacher – a perfect embodiment of the neighbourhood’s multicultural character. On the street, Weldemichael is greeted by an Eritrean neighbour. Four months ago he was issued the keys to his new home, in the Mussenstraat in Amsterdam.

He has also issued a five-year residence permit. And started to use his own name again: Hruy Weldemichael. ‘You don’t have to call me Biniam anymore,’ he says, several hours before our trip to Heumensoord, referring to the pseudonym he used as a columnist. He has no problem being photographed. ‘Now that I have a residence permit, I don’t have to worry,’ he explains in his Amsterdam home.

His ground-floor apartment has a large sectional sofa, a table with four chairs and a desk – all purchased at second-hand stores. The walls are still a little bare. He also has a terrace, two bedrooms and a kitchen all to himself.

For someone used to having a lot of people around, the quiet took some getting used to. In Asmara, where Weldemichael studied geography, he lived with other students. After getting married, he lived with his wife and his mother. ‘I felt a little lonely when I first moved to Amsterdam, but things are better now.’ 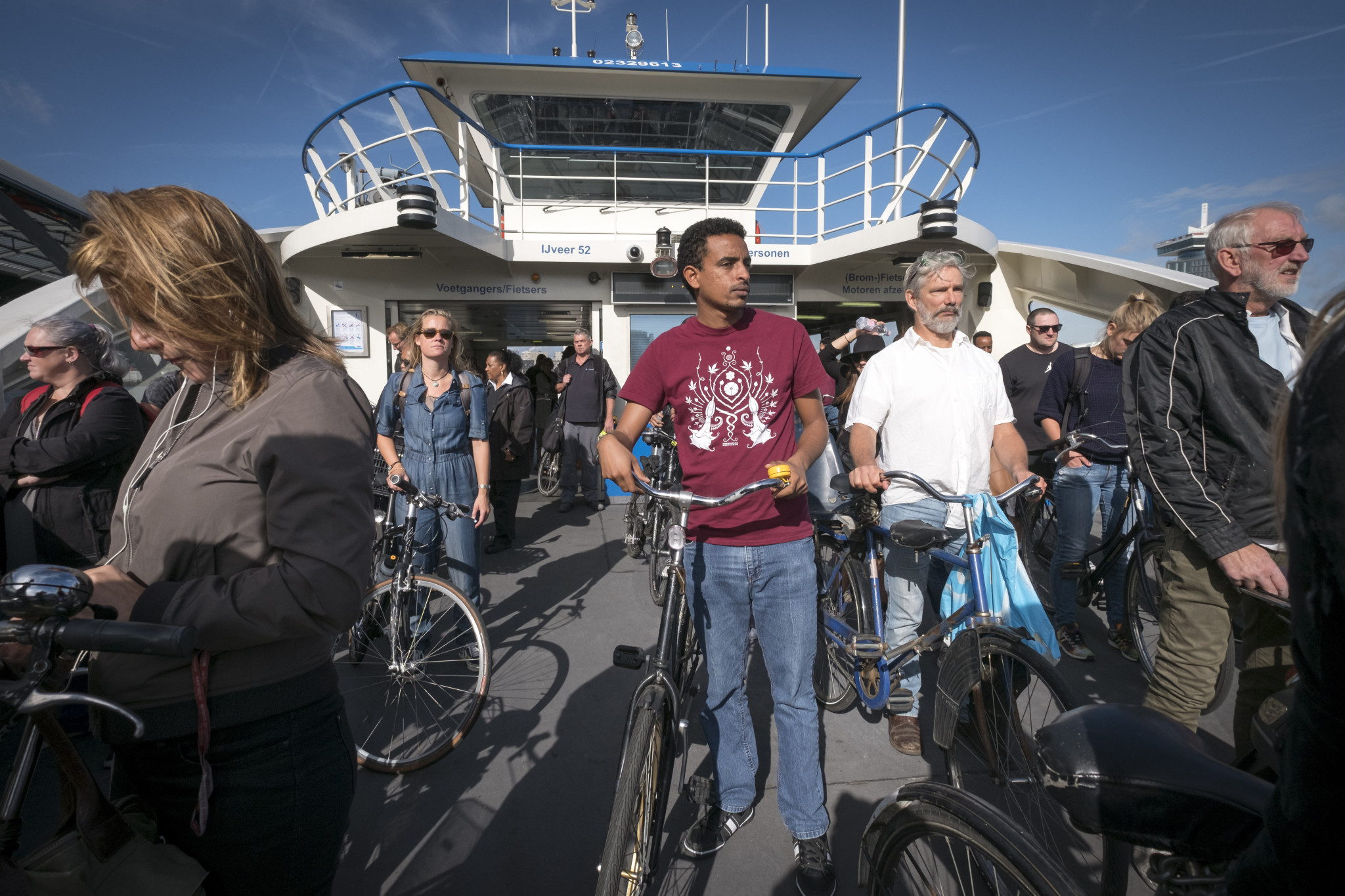 He keeps pretty busy. Four times a week, Weldemichael bikes ten minutes to the ferry, which takes him across the IJ. He then crosses the city, along the canals and the Rijksmuseum, through the yuppie neighbourhoods, until he reaches the Zuidas. There he takes language courses at the Vrije Universiteit. ‘Last week I completed A1 level – and I didn’t make a single mistake!’

A few months ago, when Weldemichael was still staying at the asylum seekers centre in Almere, he decided to learn Dutch. But the classes filled up pretty quickly and all the spots were taken. So instead he wrote down translations on yellow Post-it notes and stuck them on his bedroom wall.

Now he practises short conversations in Dutch with a neighbour in his multicultural neighbourhood. Fortunately, like Weldemichael, his upstairs neighbour also speaks English. The Eritrean family down the street sometimes invites Weldemichael over for a traditional Eritrean meal.

‘I’d come back for the people of Nijmegen, but Amsterdam offers better opportunities.’

Letter of recommendation
Despite having only lived in Heumensoord for two months, the camp really enriched his life. He made lots of friends there, many of whom also live in North Amsterdam, and they often get together to watch Champions League games. Weldemichael also has fond memories of the social geography researchers in Nijmegen. Last summer, he was able to enrol in a summer course thanks to a recommendation letter sent by Olivier Kramsch and Kolar Aparna to their colleagues at the University of Amsterdam (UvA). The UvA organised a series of lectures on the geography of Amsterdam specifically geared towards refugees. There were many more applicants than places.

One of Weldemichael’s friends from Heumensoord travels from Nijmegen to Amsterdam every Sunday to attend a programming course developed by the Amsterdam-based organisation Hack Your Future. ‘We are developing a website to translate Tigrinya, an Eritrean language, into English. This can help Eritreans learn English in the future.’

Weldemichael hopes one day to turn website development into a career. ‘First I have to learn Dutch, but then I want to study. I don’t think my Eritrean geography diploma will help me to find work.’

Does he have any plans to return to Nijmegen? He smiles, not wanting to be impolite, then says: ‘I’d come back for the people, but Amsterdam offers better opportunities.’

After the Heumensoord camp was dismantled, many of the activities organised by Radboud University were put on hold. Nevertheless, the work group for refugees continues to exist, chaired by former Rector Magnificus Bas Kortmann. According to one of the members, lawyer Ricky van Oers, the group is planning to resume their activities as soon as the former tax administration office on Stieltjesstraat is turned into an emergency shelter. Whether this will actually happen, however, remains unclear. Initially, the building was supposed to accommodate five hundred refugees in September. But with a decline in the number of asylum requests, the future is uncertain.

The work group organised a crowdfunding campaign to provide Heumensoord residents with Dutch language books and Radboud Meets Refugees, a day when academics and students from Heumensoord were invited to spend a day on campus. Another noteworthy activity, organised by the Faculty of Law, was the lecture series Food for Thought, which was attended by the Minister of Education, Jet Bussemaker.

The Department of Geography, Planning and Environment is open to the idea of welcoming refugees into the classroom. This was the case when Heumensoord was still used as an emergency shelter and it is still the case today. Initiator Kolar Aparna hopes that more study programmes will follow their lead. ‘Heumensoord may be gone, but there are still plenty of refugees in Nijmegen,’ says the PhD candidate. ‘It’s our social responsibility to give these refugees access to both the university and the city of Nijmegen.’

This article was published in Vox #3 (in Dutch).

Heino Falcke: ‘It is good that the university is investing in top research’

Riis, the ‘camping student’, now lives in a monastery