Internationalisation is not a new concept within science. Researchers travel to places all over the world to exchange knowledge and strengthen each other. Physicist Theo Rasing even has to thank his Japanese colleague for his help with winning the Spinoza prize.

Professor of Experimental Physics Theo Rasing looks amused. ‘Is Nijmegen ready for internationals? Well, for as long as I’ve been here, I’ve worked with international students and researchers. And I’ve worked here for thirty years!’ For Nijmegen researchers like Rasing, internationalisation is not something to question but to take for granted, especially in science and medicine. Researchers in these fields publish in English-language journals, fly across the globe to attend conferences, and engage in partnerships that reach from Australia to the US. In many departments, the working language is English.

Many Nijmegen discoveries are the direct result of this internationalisation, explains Rasing. It’s actually very simple, he says. ‘Internationalisation leads to a brain gain. You benefit from the knowledge people acquire elsewhere.’ Think of the Professors of Russian origin Mikhail Katsnelson and Andre Geim, who gained world fame with their Nobel-winning research on graphene. ‘It’s fantastic that they’re affiliated with our University.’ But people from other countries, such as Ukraine, India and – closer to home – Italy, also walk the corridors of Rasing’s Institute for Molecules and Materials.

What’s more, the physicist owes his own greatest claim to fame – optical switches – to the arrival of a foreign researcher. An optical switch is a method for saving ones and zeros on hard disks using laser, rather than electricity as is commonly done now. In future, this will allow computers to be thousands of times faster and more energy-efficient – a much needed development in a world full of data-slurping companies like Google and Facebook. In 2008, Rasing was awarded a Spinoza Prize for this work.

He would never have won this prize without a Japanese researcher who arrived in Nijmegen fifteen years ago, remembers Rasing. The Nijmegen team was good at laser research, but not at creating the right materials for this kind of optical switch to function. In Japan, however, they knew about something called magneto-optical materials. ‘All I had to do was say to this postdoc: I need a material with these particular properties, and he instantly knew which materials to combine, and in what proportions.’ The postdoc in question is now a professor, says Rasing – and they still work together.

Besides knowledge, researchers from abroad also bring a lot of intrinsic motivation, in Rasing’s experience, which makes them a good example for their Dutch lab colleagues. “In their own country, they’ve often had to compete with many others for the grant that allowed them to come here.” The Dutch have it easy in this respect.

‘The first international science professor was already here in 1961.’

But internationalisation also brings challenges in its wake. For example, international researchers often need time to get used to the Dutch academic culture. Rasing: ‘The Japanese and the Chinese, for instance, are still coming from a system – how shall I put it? – like the one we had here thirty years ago. A stricter regime. Very hierarchical.’ They’re used to following the Professor’s instructions, while Dutch junior researchers are used to much more autonomy in their work.

Peter Hagoort, Director of the Donders Centre for Cognitive Neuroimaging and the Max Planck Institute for Psycholinguistics (MPI), recognises these cultural differences. His institutes are also home to a big melting pot of nationalities – at the Donders Institute they even have a big world map on the wall with at least one hundred drawing pins, one for each nationality that ever worked at the Institute. ‘The Dutch can be pretty blunt,’ the Professor admits, and this shows in the jokes they make. It’s something you have to be careful with when you work with people who are more sensitive to hierarchy, like Germans for example. Hagoort ran into this himself when he came back as a Director to MPI, where he once started his career as a student assistant. While he used to be able to joke about a person spending most of their time lazing about, now these kinds of remarks were suddenly taken very seriously. He laughs: ‘My jokes suddenly had completely different implications. And all the while I was the same person, or so I thought.’

Hagoort doesn’t think the mix of nationalities ever leads to real cultural clashes. On the contrary. ‘Working together on the same topics actually helps people gain a broader perspective on differences between nationalities. Research offers a common framework. This is very valuable in our current political climate.’

Partially thanks to the influx of internationals the Donders Institute is now a leading pioneer in certain domains, says Hagoort. For example in measuring and analysing brainwaves using magnetoencephalography (MEG), an advanced alternative for the well-known EEG. ‘The MEG world was almost dead when Donders started working on this topic. Now it’s a booming field of research.’ The discoveries made at the brain institute by the German Pascal Fries and the Danish Ole Jensen certainly contributed to this success, explains Hagoort. Jensen, for example, demonstrated that the slower alpha brain waves play an important role in attention processes. Fries in turn showed how brain waves contribute to communication between different brain areas.

Now both Fries and Jensen lead their own institutes in Germany and England. It’s not such a bad thing that researchers like this leave for other countries, says Hagoort. ‘They are kind of ambassadors for our Institute. It helps us to become known on the international scene.’

To keep attracting international experts, the government, in particular the provincial government, needs to invest more money, says Hagoort. ‘Limburg is investing millions in the Maastricht Brain Imaging Centre. Why don’t we do the same?’

It’s clear that Nijmegen has more than enough experience with internationalisation, says Theo Rasing pragmatically. ‘Dymanus, the first physics professor here at the Science Faculty, came from Poland. And that was back in 1961!’

The long journey of a complaint: how confidential advisors work 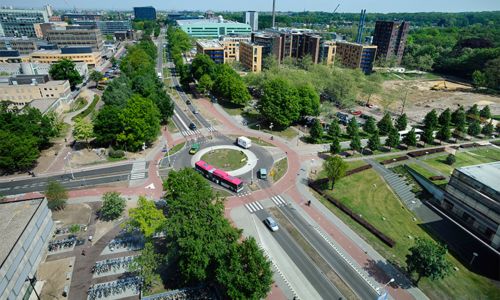