Limits to growth (conclusion): the university keeps growing and continues to recruit students

Radboud University grows a little bigger every year. How do fuller lecture halls impact teaching, student life and the city of Nijmegen? In the Limits to growth series, Vox explores the university’s growing pains. In this final edition: why the university keeps advertising itself.

Jan Bransen was working in Utrecht in the early 1990s when he saw an advertisement for a university for the first time. And not for his university either. All over the city, in bus shelters, there were posters advertising the University of Groningen. Bransen found that very strange. Many of his colleagues felt indignant at a university being advertised. 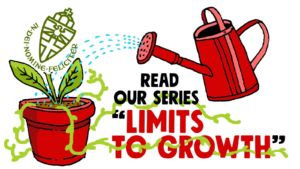 In the coming weeks, Vox will highlight the steady growth of Radboud University. This is the fifth article in the series.
1. The growing pains of the university
2. Active student life under pressure
3. Fighting for office space
4. The sports centre is bursting at the seams
5. The explosion of psychology in 2016
6. Is the campus still easily accessible?
7. Lecture halls full of unhappy students
8. Student recruitment without growth ambitions

‘It was scandalous,’ says the Professor of Philosophy of Behavioural Sciences. Advertising a university? It just wasn’t the done thing. ‘All kinds of people in academia thought it was wrong.’

This sentiment is less relatable now. Every university, like every large company, has a marketing department. Students of the University of Amsterdam or University of Twente staff grin out at you from Instagram adverts. The manner of advertising also stands out. Take Radboud University’s own ‘You have a part to play’ campaign where the university went off in search of new ‘influencers’, that is new employees. This campaign was accompanied by an emotive set of photos and videos of sea turtles tangled in fishing nets and a scorched globe.

Radboud University, like every other university, is engaged with student recruitment too. From the fourth year of secondary school, pupils in the surrounding areas receive invitations to open days on Snapchat and Instagram. At the same time, the university’s student numbers are growing faster than it can keep up with: the sports centre is crowded and you often have to fight for a work station. Can this tension be reconciled?

It would not be controversial to say that the university’s marketing department has gained a more important status in recent years, says Pim van Zanen, Director of the Marketing & Communications Division. ‘This is not because it has been allotted a substantially bigger budget or more staff over the past few years, but because our position is better recognised,’ he says.

The university changed the arrangement of its support services in 2020. Marketing became one of six divisions, alongside Human Resources, Campus & Facilities, and Finance & Control, among others. The six directors, including Van Zanen, form the ‘Radboud Services’ management team.

According to Van Zanen, the main goal of the marketing department is to improve ‘the visibility, attractiveness and recognisability of – and the bond with and loyalty to – the university’. In brief, the department ensures that people see and recognise the university and tries to enthuse people to come to work or study. The 2019 ‘You have a part to play’ campaign was primarily designed to attract more employees.

‘Some students may just want to make money and go elsewhere’

The fact that prospective students see the campaign as well is ‘the point’, says Van Zanen. ‘We want to appeal to young people, new employees, partners, politicians and every demographic we can,’ he says. He does not believe that this kind of campaign immediately leads to an increase in students. In fact, he thinks the opposite. ‘I think that we are speaking out about what we stand for more than ever. There are prospective students who will not be fans of the social significance the university wants to convey. They may just want to make money and go elsewhere.’

A rather perverse stimulus

If it were up to Jan Bransen, Professor of Philosophy, the university should simply stop recruiting. Bransen, who is also the academic leader of the Radboud Teaching and Learning Centre, has long been concerned about the growing number of students and the impact this growth has on the quality of education. ‘I have no idea if recruitment actually attracts more students,’ he says. ‘I don’t think anyone truly knows how effective advertising is, but we are too scared to stop.’

This is partly due to the fact that government funding is determined in some measure by student numbers, says Bransen. He believes this is a rather perverse stimulus. ‘The university is not a commodity.’ At the same times, marketing departments have good intentions, Bransen thinks. ‘I think the university really does believe that it is more about quality than quantitative growth. And there are a few tools that mitigate that growth. There is massive upward pressure. And, seemingly, we can’t stop international students either.’

‘We are not campaigning to attract as many students as possible’

‘Information and recruitment are two-sided,’ says Van den Broek. ‘We want students to make the right choice, and we want there to be sufficient inflow.’ But making the right choice is our highest priority, she says. The department has a lot of information events for different target groups: from student for a day events to information events at secondary schools. ‘Open days are incredibly important,’ states van den Broek. If we use targeted advertising for VWO students, it is always specifically for open days, she says. It is not about promoting the university as in general.
Prospective students and their parents at an open day.

Aren’t you attracting even more students by targeting 3 or 4 VWO pupils in advertisements? No, says Paul Nelissen, lecturer and researcher in Communication Sciences. The research he does with his students – practical and with focus groups – is also used by the education marketing department. ‘Being there and planting the seed as early as possible ensures that the best possible choices are made.’ The later the choice, the greater the chance of doubt.

‘Ten or so years ago, recruitment was focussed on getting as many students in as possible,’ says Nelissen. ‘It soon became clear that you cannot rely on students who immediately start to doubt their choices,’ he says. ‘That realisation led to more research: what students need, what processes they go through in making a choice, what factors ultimately determine it.’

At the same time, the education marketing department does not seem to be taking into account the risks of overburdening the university, Van den Broek says. Fact of the matter is, external factors are hard to predict, she reasons. ‘A decline in the number of entrants to the Bachelor’s programmes was still predicted in parts of the Netherlands a few years ago, including here in Nijmegen.’ That didn’t happen.

‘When we provide information, we consider that HBO may be a better fit for some pupils,’ says Van den Broek. The department works together with the HAN to provide this information. ‘A lot of people just assume that you automatically go to university after you finish VWO, but the question is whether this is really the best option.’

According to Van den Broek, stopping recruitment efforts altogether would not do much to the growing numbers. ‘It’s not like we can just flick a switch and get more or fewer students into the university.’ Is not recruiting an option at all? ‘You want to help people choose the right study, don’t you,’ says Van den Broek.

Paul Nelissen too does not believe that recruiting less would do anything to halt the growth in student numbers. ‘People will find their own way anyway. The contact with the university is more important and more decisive for making a choice than advertising. We can see that in the evaluations.’ This does not mean that advertising does not do anything at all, but what it does do is difficult to measure. ‘There is a famous saying about the effectiveness of advertising,’ says Nelissen. ‘Half of all advertising is effective. We just don’t know which half. This is most certainly the case here.’ 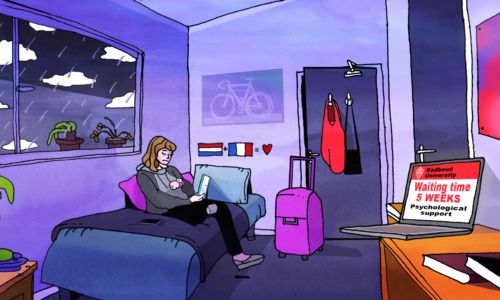 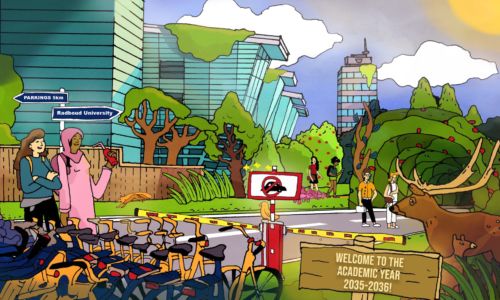 Limits to growth (6): how campus will remain accessible and safe in the future