The telescopes used by Heino Falcke and his team to take the first picture of a black hole have more to offer than just shooting pretty photos. Today, Nijmegen astronomers show how the observations also help to understand the origins of gigantic plasma emissions. In the future, they might also help in answering one of the biggest questions in physics.

Black holes are like space Cookie Monsters: they consume everything that gets near them, including entire stars. Although – everything? A small portion of matter is able to escape ‘the gates to hell’, as Professor of Astrophysics Heino Falcke called the black hole in the picture that he presented to the world two years ago. Plasma jets launch this matter into space at nearly the speed of light.

On the basis of new analyses carried out by Radboud astronomers Monika Mościbrodzka, Sara Issaoun and others, we can now better understand how these cosmic lucky devils can escape their nearly irrevocable fate. Magnetic fields at close proximity to the black hole reflect part of the matter back into space before the black hole can swallow it.

The theory behind this had previously existed, but observations of the black hole M87 – the very same as in the renowned picture from 2019 – seem to confirm this, the Nijmegen scientists write today in The Astrophysical Journal, together with international colleagues. Along with this, they publish a new series of pictures of the black hole and the sector of the universe surrounding it. To this end, the astronomers analysed the same data that was used to produce the very first picture and that was measured by seven interconnected telescopes spread around the globe, the Event Horizon Telescope (EHT).

The new images show how the light both around the hole and in the plasma jets is polarised, as if it had passed through polarised glasses of cosmic proportions. The constructed pictures combine the real 2019 images of the black hole with polarisation information. Polarisation glasses, which can for example filter out the reflection from water surfaces, cause all light waves passing through to move up and down in parallel in the same plane, instead of doing so in all directions. A similar polarisation, but acting on the light of plasma jets, is what one would expect if the jets were caused by a magnetic phenomenon, the astronomers explain. This means that many alternative theories on the origins of the jets can be ruled out.

How these magnetic fields arise can be explained using ‘Falcke’s photo’ from 2019. When objects rotate into the black hole (like water in an emptying sink), they become super-hot and form a plasma: the orange-yellowish spots in the picture. As that plasma carries an electric charge, the laws of physics dictate that it creates a magnetic field.

‘We have found new and crucial evidence that helps us to understand how magnetic field behave around black holes and how the activity in this very compact piece of space can drive powerful jets’, Mościbrodzka explains. ‘In 1920, this was the first plasma jet to be discovered, and now it also looks to be the first one whose origins we understand.’

Astronomer Marc Klein Wolt, who was not directly involved in the new publication, emphasises that to astronomy insiders, this new publication is more than just a fun discovery. Thanks to the EHT and for the first time in history, we can now test many more physical theories around cosmic processes in practice, he explains on the phone. ‘For example, the relation between Einstein’s theory of relativity and quantum mechanics.’

That question remains one of the primary unsolved issues in physics and has been unresolved for over a century. Black holes are among the few phenomena in which both theories are involved and that could provide an answer. However, it has long been thought that they could not be observed from Earth – that is, until the 2019 picture was taken.

Maybe we can observe stars being swallowed in real-time

The EHT team hopes to show a picture of the black hole at the centre of our Milky Way by the end of the year, Issaoun says. That one is a lot closer than M87, which might make it possible to observe stars being swallowed by the black hole in real-time. Klein Wolt: ‘That would allow us to see in greater detail what exactly happens in a black hole like this and what that tells us about the various theories.’

Klein Wolt, who is also a member of the EHT team, hopes to be able to contribute as well by adding an extra telescope to the black-hole project. This Africa Millimetre Telescope is planned to be erected in Namibia. ‘That is the ideal spot to observe the centre of the Milky Way, and it will increase the resolution of the EHT measurements.’ However, this project still requires millions of euros in funding. ‘I am an optimist by nature. I hope that we will be able to have the deal closed by next year.’ 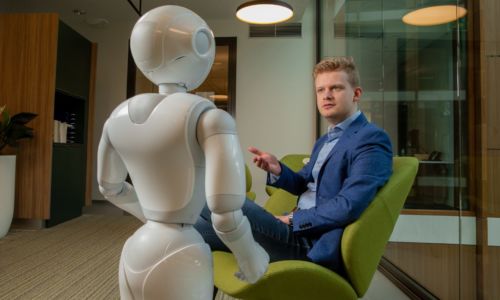