Last week, a lot of international students arrived in Nijmegen for their orientation week. Bénédicte Gold-Dag and Hannah Holz are two of them. 'On a student budget, the orientation week costs too much.'

After having lived in separate cities bridged by a 14-hour bus ride, Bénédicte Gold-Dalg (23) and Hannah Holz (19) decided to shorten the distance between them. The Netherlands proved helpful.

Gold-Dalg is starting a pre-master in creative industries, Holz her BA in Philosophy, politics and society. ‘Coming from Germany, I felt compelled by the comfortable and low-key student life I had heard of’, says Holz. For French Gold-Dalg, the prospect of moving to Nijmegen mainly involved the ability to get by in English. Moving to Germany, were life would have been less accessible without speaking German, was not as appealing.

Now, a few days after having arrived, they sit together with the TV turned on, Holz working on a computer. It’s mid-way through orientation week or ‘integration week’ as Gold-Dalg fittingly calls it.

They are not participating. ‘To do so as a master’s student, you had to pay 125 euros. Per bachelor level student the price is a bit lower, 80,’ Gold-Dalg says. ‘On a student budget it was really too much. If you want new students to feel welcomed and meet other people but you put up a boundary, of course not everyone will come.’

Both Gold-Dalg and Holz seem to agree that the idea of either paying or being excluded from the start is silly. ‘Now that we’ve seen people get together in social groups and at parties around town we’re thinking: are we missing something? Is everyone else getting to know each other?’ Neither of them seem too worried about it anyway, giving out an air of ease and a ‘take it as it comes’-attitude. 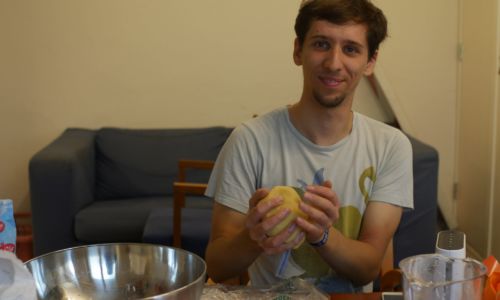