Astronomer Sara Issaoun worked on the photograph of ‘our’ black hole. From the deserts of Arizona, she hunts for other black holes. ‘I hope we can capture another unique moment.’

Last week the photograph of Sagittarius A* was presented, the black hole in the Milky Way. That was the one goal that scientists of the Event Horizon Telescope worked towards since their founding. Sara Issaoun, one of the involved scientists, talks about what this discovery means for science, how she experienced the run-up to the press conference and what else we may expect in the future.

Issaoun is an astronomer at the centre for Astrophysics at the prestigious Harvard University. Since 2014, she has been part of the Event Horizon Telescope cooperation (EHT), a gigantic project that connected eight telescopes from the deserts of South America to the South Pole with each other, all to get an image of Sagittarius A*. That is a black matter in the centre of our galaxy, which, until the photograph was taken, was only suspected to be a black hole.

Presentation of the photograph

Last Thursday the moment had finally arrived. After over fifteen years the main question which the EHT pondered over was answered. ‘It was very exciting,’ says Issaoun enthusiastically. ‘As a research group, we were not allowed to say anything about it for so long that we really lived up to that day. And then the moment was finally there.’

Many people probably remember the photograph of M87, the first image of a black hole. So for the general public, this discovery may feel like just another photograph. How is that for you?

‘I understand very well that this result might be a little less interesting for the general public. Last time, of course, it was the first time something ’tangible’ was presented. That novelty is now gone. However, from a scientific point of view, this is a big step. We had already seen that the stars in our galaxy were orbiting around something strange, something that had to be in the centre of our galaxy. We just didn’t know then that this was a black hole, although it did look like one.’

So how can you be sure that it is a black hole?

‘By looking at how the stars move around the heavy matter, we were able to determine its gravity and weight. With black holes, mass and size are linked: if you know the mass of a black hole, you can also calculate its size. According to Einstein’s General Theory of Relativity, you can then work out how big the shadow left by the black hole should be if you take a picture of it, as we have done now. Once we had the picture, the shadow matched our predictive calculation exactly. Then we could tell that it was indeed a black hole.

What do you see?

The black hole itself is impossible to capture. Every particle of light that dives into it is sucked in by its enormous attraction. Therefore, the orange border in the well-known photographs is not light rays, but particles of radio radiation that have just managed to escape. The telescopes of the EHT can capture these radiation particles. The researchers then digitally combine the signals and convert them into a ‘normal’ photograph. 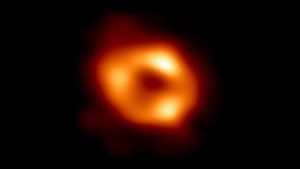 What does this confirmation mean for science?

‘We think that the centre of almost all galaxies consists of a supermassive black hole, just like ours. We don’t know exactly how they get there, but almost every galaxy seems to have one, around which everything revolves. This is remarkable. Despite their enormous size, these black holes are relatively small compared to the galaxies. Yet they possess an enormous power. They send out plasma jets, ‘eat’ matter and spit it out again – sometimes even into other galaxies. All these processes happen almost at the speed of light. This makes them the most powerful energies in the universe.

Black holes are also responsible for the formation of stars and planets. It is also likely that our life was created by a ‘burst’ from our own black hole. But they can also collide with other galaxies. The holes then merge to form a super-massive black hole.

This is also the fate of our own Milky Way. Although it will take some time, only after the sun has died out. By looking at our own black hole and comparing it to holes like M87, researchers hope to understand black holes a lot better in the future.

We have also come a long way in confirming Einstein’s theory of gravity. There are still a number of other theories about gravity that we cannot yet rule out. We can therefore not yet confirm Einstein’s theory with certainty, but we are well on our way.’

‘Photographing M87 was a gamble’

Heino Falcke said that for him this discovery felt like a conclusion. ‘The wedding after the first kiss’. It sounds as if you are mainly looking to the future.

‘I do understand Heino Falcke. He has worked towards this for 25 years. The story of photographing Sagittarius A* is also enormously intertwined with the story of EHT. It was the reason why the cooperation was established in the first place. Indeed, I see photographing our black hole much more as the beginning of something new.

After all, photographing M87 was a gamble. We didn’t know how big the black hole was, so there was a good chance we wouldn’t be able to see it with our techniques. Sagittarius A* was the hole we were really after all along. Now that we know how, we can explore further from there. I see it as if we have been working all this time to build a kind of ‘laboratory’, a method. Now that it is finished, we can do so much more.’

‘The data we collected in 2017 for M87 and Sagittarius A* are unfortunately not good enough to see how the black holes change over time. We need more data for that, which we are working on. We have now managed to connect eleven telescopes. In 2017, there were eight. The data we can collect increase exponentially with each added telescope, so these three add enormously.

We can now use them to take new measurements and make videos. This will allow us to see how black holes change over time and hopefully understand them better. We might even see a black hole erupt. Or perhaps we’ll be able to capture another unique moment. I compare it to opening a new laboratory: you see all kinds of materials, you pick some and experiment with them, but there’s so much more that you haven’t touched yet. I’m excited to discover all that.’

EHT regularly emphasises that these results are the result of a group project. Often, however, studies put forward a few key people. What about that?

‘That’s right. The first author of our article is therefore ‘The EHT collaboration’. After that, the authors appear in alphabetical order. There are several reasons for this. Firstly, with such a large project as this it is simply impossible to determine who has made a larger contribution. Secondly, you cannot do this project alone. You need so many people from so many different disciplines. From people with extensive knowledge of materials to people who do physical calculations and people on site.

In my opinion, this is not only true for this project. You never work alone in science. The amount of work that goes into new findings cannot possibly be done by one person. I think that is why it is very important to show this global cooperation. That we have been able to achieve this together, across language barriers, cultural differences and even through a pandemic. It is beautiful how people from completely different backgrounds can come together when you are working towards a common goal.’

Radboud University plays a major role in the research into black holes. For example, the university has earmarked a great deal of money for research and professor of astronomy Heino Falcke is one of the bigger names in the field. The ‘Heino Falcke Group’ consists of several PhD students, previously including Sara Issaoun as well.

Down The Rabbit Hole: Partying to Belong

Celebrating the end of slavery: ‘For me, Keti Koti is already a national holiday’