Research funding organisation NWO recently included an ‘embedding guarantee’ requirement in its VENI and VIDI grant applications. The practical implications for Nijmegen are as yet unclear, as apparent from an informal survey among researchers. ‘I’m at a total loss.’

NWO, the Netherlands Organisation for Scientific Research, wishes to increase its acceptance rate for grant applications. To achieve this, starting this autumn, the organisation is introducing an embedding guarantee for VENI and VID laureates. The latter must be offered a tenure track or permanent appointment by their institution of choice. Radboud University wants faculties to offer researchers a tenure track or permanent appointment prior to the VIDI application, as announced last week on behalf of the Board by Han van Krieken. A brief VOX survey showed that Nijmegen researchers have no idea about the concrete implications of these ambitions. ‘The VIDI deadline is already in seven months.’

Branka Milivojevic (38), postdoc at the Donders Centre for Cognitive Neuroimaging

‘I was in shock when I saw the NWO announcement. It felt like someone had pulled the rug out from under my feet. I took my boyfriend and children out for dinner, which is what I usually do to make myself feel better.

An embedding guarantee sounds great, as does the University’s intention of offering researchers a tenure track if they apply for a VIDI. But the reality is that my current institute has little structural funding. I now hope the faculty I used to work for will agree to give me this opportunity, but otherwise I’ll have to shop around at other faculties or universities. Surely, this is not the idea?

I’m at a total loss. The VIDI deadline is in seven months, and this embedding requirement just came out of the blue. There are no known procedures, no protocols, let alone any selection criteria. The same goes for my institute. If these are established around the summer, that’s already too late. Researchers start planning their research much earlier.

The VIDI is one of the rare individual grants that make it possible to start your own line of research, and one of the few that allow you to demonstrate your excellence with an eye to permanent appointment. Instead of leaving this assessment to an external committee, it now comes to rest with faculties, which are not – or at least not yet – equipped for it.’

Arne Smeets (31) holds a tenure track position at the Institute for Mathematics, Astrophysics and Particle Physics

‘These plans raise a lot of questions. The threshold of the embedding guarantee may make the process much less transparent. What criteria will be used to assess academic merit? NWO uses peer reviews to assess applications, but how are faculties supposed to do it when they also have to decide which candidates are allowed to apply in the first place?

To what extent will financial considerations, HR strategy and research thematic choices play a role behind the scenes? I hope they’ll be able to guarantee a fair process for all potential candidates.

What I also find striking is how abruptly the NWO changes are being implemented. The FWO (Research Foundation Flanders), the Belgian equivalent of NWO, took much longer to implement similar changes. A lot of young researchers now run the risk of being excluded because of a rather unclear process, the speed of which is taking them by surprise. I find this strange.
Of course I understand that universities want to have more say in the process. Being a good researcher is about much more than attracting large research grants: you also need to be a good teacher, colleague and team player.

On the other hand, the VENI and VIDI rounds in their current form have the advantage that talented young researchers from outside can also join in relatively easily. They may not have so many connections within the university they’re applying to, or may not fit so neatly into already existent research. Unfortunately, ignorance tends to breed contempt…’

‘We’ve got to increase structural governmental research funding. This is the only truly sustainable measure against application pressure. Only then can indirect government funding really act as additional funding which can be distributed according to a competitive model.

I know that the University is working hard behind the scenes to find solutions to reduce the number of temporary contracts. As trade unions, PON and TRAP, we have for years worked on combatting the idea of young researchers as disposable goods. Solutions require a lot of creativity. There’re a number of options on the table, including permanent appointments on a proviso basis, and broader career perspectives than only the tenure track model.

The University wants researchers who are considered by their faculty to be good enough for a VIDI application to be offered a permanent position. But will free-thinking independent researchers – for whom the Innovative Research Incentive was originally introduced – still stand a chance?

What’s more, this won’t work if other universities still let people randomly apply for grants, knowing they only have to make an offer to successful applicants. Consensus among universities is crucial here. Otherwise this will do nothing to reduce the manic competition within the academic world.’ 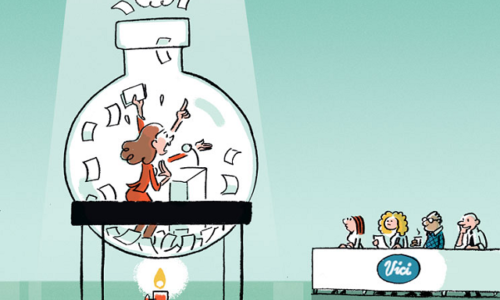 Plan: only a researcher with a permanent position can apply for a Vidi