Home » English » Student out to conquer Nijmegen with app

Student out to conquer Nijmegen with app

Following his success in Istanbul, Ahmet Kökçam recently launched an app for Nijmegen. The Turkish Master’s student aims high with his networking platform. Within three weeks Uniyard attracted five hundred users. Not enough, in his opinion: 'We have to grow faster.'

In 2015 Ahmet Kökçam (25) enrolled in a Master’s programme in European Law at Radboud University. While writing his thesis on the digital economy he had the idea of creating Uniyard – an app to help students (especially international students), get in touch with one another, sell and buy things (such as a bicycle ‘for little people’), read about the university, and even get a discount at a number of restaurants. The app includes an events calendar for students, with NEC games, open-air cinema, excursions to the Efteling, and of course drinks and parties.

The idea for Uniyard didn’t come out of the blue. The ever-resourceful Kökçam had already developed a similar app for law students during his Bachelor’s studies in Istanbul. The Istanbul Law Application was a phenomenal hit. Within a month it counted five thousand users, at which point Kökçam got a call from the university. ‘I first thought I was in trouble, since I was using the university’s name without their permission.’ But that wasn’t it. ‘They wanted to buy the app! As well as reimburse my expenses and offer the app on their site.’

In no time, the number of downloads shot up and the app appeared at the top of the Turkish app store lists. ‘Within eighteen months I had three million page reviews and close to thirty thousand users, more than the number of law students at the university.’ When Kökçam left for Nijmegen there was no one left to maintain the app, so it disappeared from the app stores. ‘A great pity, since I’d put years of work into it. But the experience is really useful for what I’m creating in Nijmegen now.’

All over the Netherlands
In February of last year, Kökçam launched his company, Uniyard, and three weeks ago he introduced his app, which is to act as local social network for new and departing international students. So far Uniyard has attracted five hundred users. ‘We have to grow faster. With the support of our sponsors, and ultimately Radboud University, it should be doable.’ The plan is to launch a Utrecht app in a few weeks’ time. ‘Hopefully, user feedback will help us improve the app. And with the help of investors, we will soon be able to offer an app for every Dutch student city!’

More information can be found on the site . The app can be downloaded here. 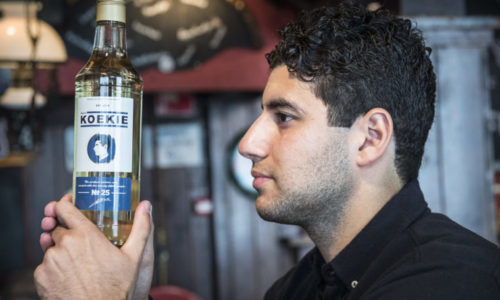