As editor for the Algemeen Nijmeegs Studentenblad Bert Brussen (41) already enjoyed challenging sacred cows. So much so that he made it into his job. Having worked for a while at GeenStijl he is now editor-in-chief of ThePostOnline. 'The Netherlands makes me depressed.'

Friday afternoon, lunchtime. Students of the Amsterdam University of Applied Sciences are sprawled in the sun along the Amstel while Bert Brussen poses for the Vox photographer. He is wearing a grey suit, no tie, and his white shirt is unbuttoned at the top. His black Ray-Ban sunglasses slide on and off his nose at the photographer’s request. Brussen did not dress up for his interview with Vox, he says. This is what he wears to go the supermarket. He thinks it’s fun. ‘All Dutch journalists wear jeans. So I don’t.’

Three men walk by. ‘Try to look a bit more cheerful, won’t you!’ says one of them, just loudly enough to be heard. An innocent remark, but Brussen cannot see the humour. ‘This is exactly what I mean. So typically Dutch. Something unusual happens on the street and people immediately have to get involved, with such a fucking cliché remark.’

Don’t expect Brussen to mince his words. If something is ugly, it’s ugly. If something bothers him, he will say it loud and clear. For example Amsterdam, his home city. ‘It seriously sucks here.’ Or the Netherlands: ‘This country makes me depressed.’

Brussen wants to emigrate. Away from Dutch meddling, rules and jealousy. He recently returned from a holiday on the Canary Islands. ‘I would like to settle there permanently. Anything I do in the Netherlands, I can do there too. As long as I have a corner to work, it’s good.’

Brussen studied philosophy in Nijmegen and is now editor-in-chief of the ThePostOnline (TPO), a news and opinion website averse to political correctness. Via TPO, right-wing opinion-makers who are not welcome in mainstream media attract millions of readers. Brussen created the website himself back in 2009, originally under the name of DeJaap.nl. It was a response to the launching of Joop.nl, a VARA opinion site. Brussen quit his work for GeenStijl and has been self-employed ever since.

Why do you want to emigrate?
‘I am not that positive about the future of the Netherlands. Criminality is on the rise, even though the CBS tries to convince us otherwise. The number of police reports may be on the decrease, but the citizens’ experience of criminality remains dramatic, and pretty much consistent. The law is powerless to intervene. In Limburg and Brabant organised crime is increasingly running the show: it’s starting to look like Narcos down there. And I expect more and more problems with Islamisation.’

Are things really so bad in the Netherlands?
‘For people like me, the Netherlands is becoming less and less fun. I can’t say things got better after the attacks on Charlie Hebdo, or the Bataclan. We are the ones to get hit. I know lots of PVV politicians and editors at GeenStijl. And Thierry Baudet. It’s incredible, the bullshit people have to put up with.

You know what it is? People have to learn to live with things that are offensive or hurtful. If you don’t like something, don’t click on it. Don’t read it. You can write whatever you like about me, but don’t assume I will read it. In the Netherlands, victims have more and more power. Minorities, women, people who are gender-neutral, they’re all saying: “I feel hurt, so I want a solution”.’ 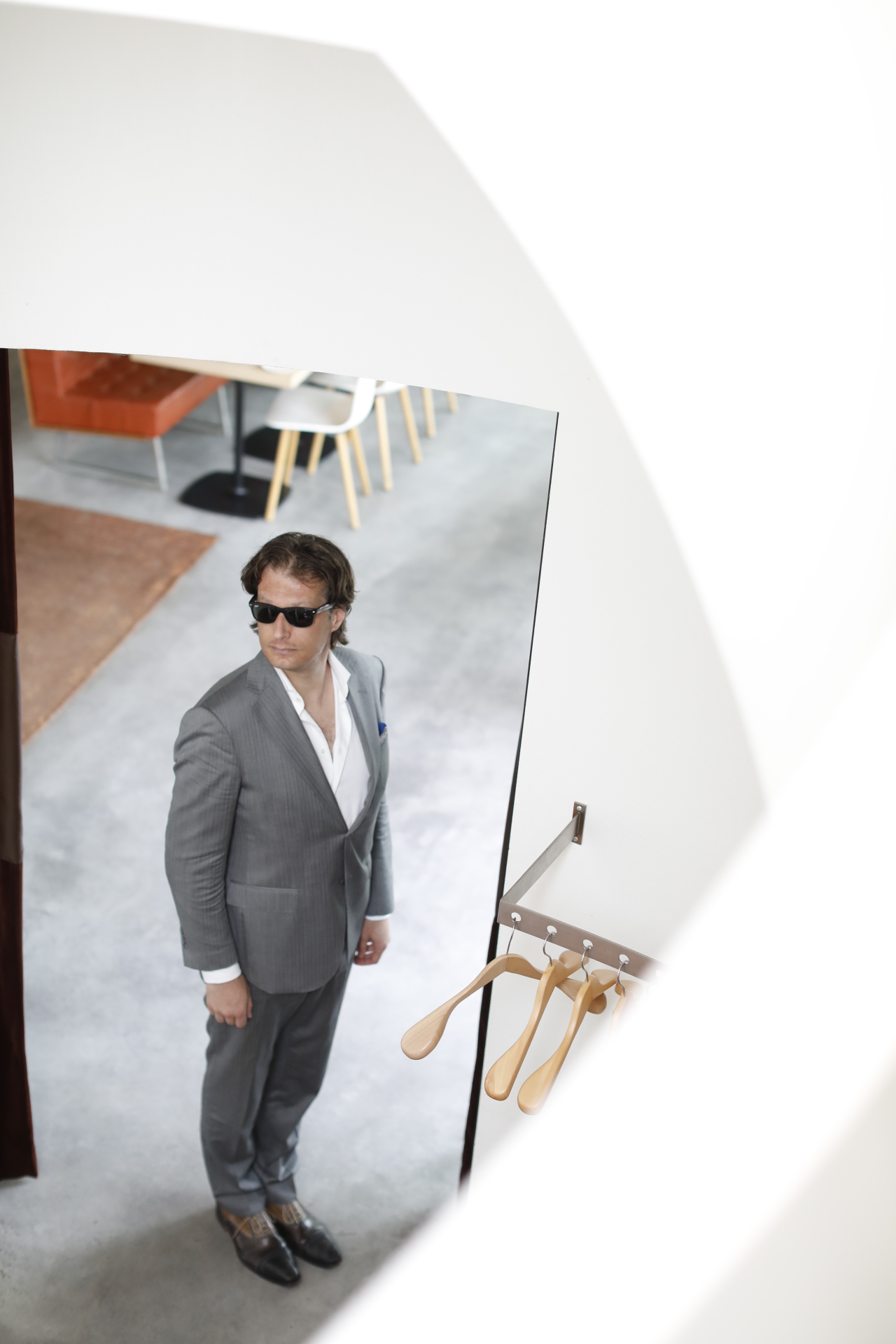 What about your new life on Tenerife, what will that look like?
‘Ah, it’s just relaxed over there. It’s officially Spain, so unfortunately still part of the EU. Ask a restaurant owner there whether there are too many rules, and he is sure to say yes. But there is not so much control. I hope to move within a year.’

And the climate is great on the islands. As far as the weather is concerned, we catch Brussen at a good time: the sun shines on Amsterdam. ‘I feel so much better now than in the winter. Then I would rather not go outside at all.’ In an earlier interview with Vrij Nederland Brussen openly talked about his winter depression and dependence on antidepressants (quote: ‘Without pills I turn into a kind of plant’).

But it’s not only the Dutch climate that gets Brussen down. It’s also the people. ‘This entire society is obsessed with being liked. I sometimes wonder: don’t you ever get lonely, or sad? People don’t dare to admit it anymore, unhappiness has become a taboo. What remains is social talk, clichés. I’m seriously worried about the generation growing up now: What will become of them? Now I really sound like an old man.’

He rarely watches TV. He finds the programmes too annoying. ‘My girlfriend sometimes watches De Wereld Draait Door. I can hardly stand it for more than five minutes. Every time there’s been an attack, Beatrice de Graaf comes on to explain that it’s all due to underprivileged youths smoking too much marijuana. It’s so cliché, it’s just state propaganda.’

Brussen was always allergic to conventions. As a student he read all the books his fellow students ignored. If something was hip, he lost interest. At the Algemeen Nijmeegs Studentenblad (ANS) at the start of the century Brussen finally found the critical minds with whom he felt at home. He was already keen to challenge sacred cows. Carolus Magnus and the Executive Board were favourite targets. ‘We were rock-hard. Find a vulnerable spot and press ahead, that was our motto.’ He never completed his philosophy degree – ‘I was having far too much fun at the ANS.’

A year ago you agreed to do an interview for ANS, in which you criticised Vox. “Reading Vox will make you fall into a coma,” claimed the text balloon above your head.
‘Well, isn’t Vox a boring magazine, a humourless folder? In my days, in any case, it was about things that couldn’t interest me less as a student. It’s a pity that there aren’t more ANS-like publications, that are really independent. I guess we were the Nijmegen GeenStijl on paper, back in those days. Studying is already serious enough. People would read ANS and grin from beginning to end. Plus it was a great learning school for me as a young journalist.’ 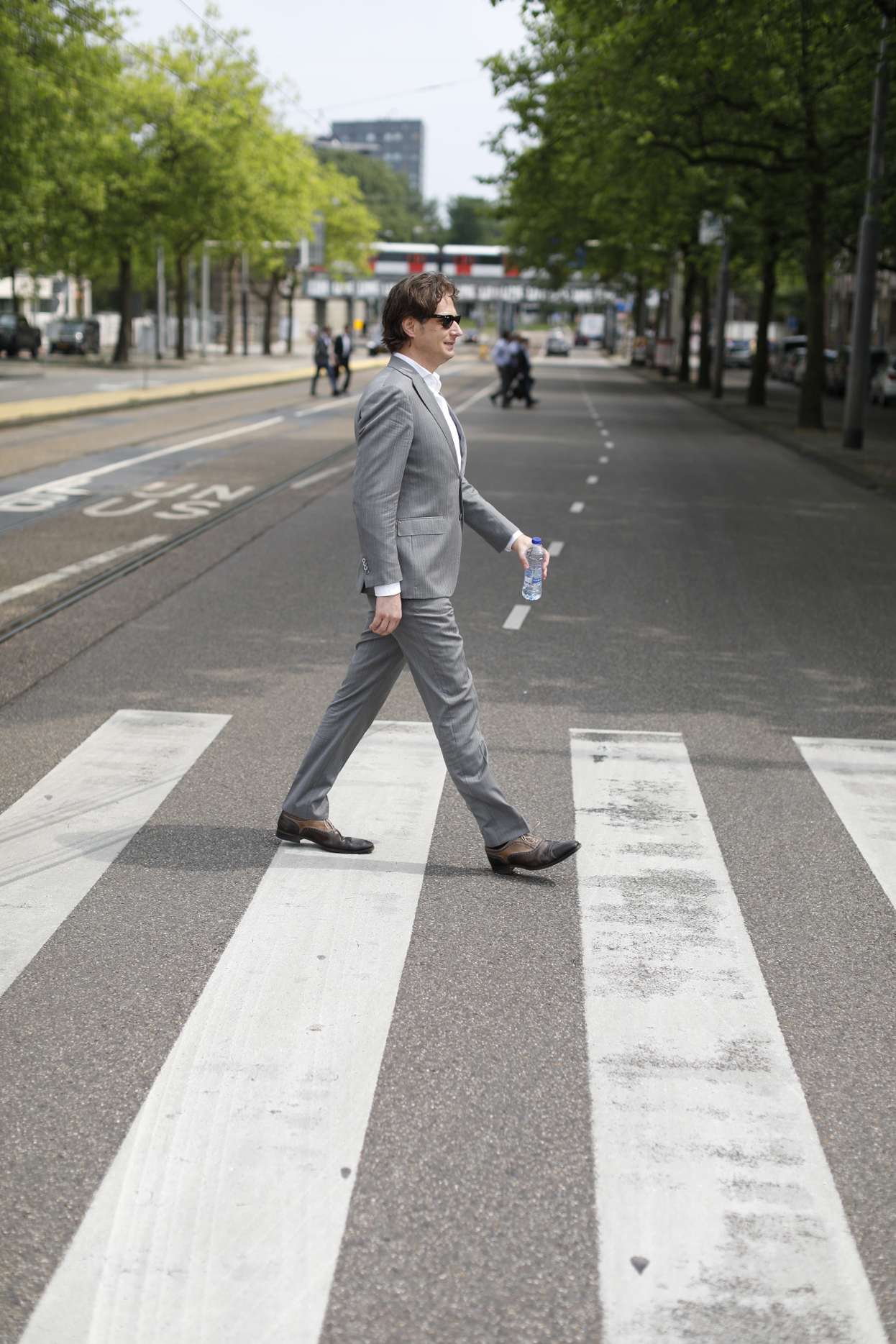 In 2004 you founded a student party, LIAM. Why?
‘At the time you had SIAM, Studenten In Actieve Medezeggenschap (Students in Active Co-participation). Those were all D66 boys and girls who joined the board to improve their CV. Those diplomatic types I was so opposed to. They had all these empty slogans like ‘For a better University!’, etc. But you know what: nobody cares! 90 percent of students are there to study and drink beer every night. So I founded LIAM (Lucas In Active Co-participation – Brussen used the pseudonym Lucas, eds.). During a debate I had someone throw a cream pie into my face, as a playful nod to Pim Fortuyn. Luckily I didn’t win any seats, because I am clearly not suited for politics.’

And even later, you never considered going into politics, the way Jan Roos did with GeenPeil
‘Absolutely not. I am a joker and a screamer, just like Roos. Someone who stands on the side-line. If you go into politics, you really have to be capable. I would go nuts after one day at the Chamber of Representatives. You have to make compromises. Politicians never get angry and walk away, with the exception of Geert Wilders perhaps. There is someone I admire.’

‘In a snap election I would vote for Thierry Baudet’

What are your thoughts on the new government formation?
‘I hope for a minority cabinet with VVD, CDA and D66. That would be an OK cabinet. They can rule together for a while. As long as GroenLinks doesn’t get in. That party is out to get rid of anything that’s fun. I personally voted for PVV, as a protest vote, although if there are new elections, I will vote for Thierry Baudet. He’s doing really well.’

What about Trump?
‘The first months were not that great, I’ll admit. But I am glad he’s there. It’s understandable that he cancelled the climate agreement: America was built on a gross abuse of fossil fuels. Their cars are holy to them. This is of course terrible for the climate. I don’t have any children, so it’s easy for me to say that things will last my lifetime. So I understand Trump, but that doesn’t mean that I don’t recognise the problem of climate change. As far as I’m concerned, we could spend more money on innovation and green energy.’

Until five years ago Brussen was all over Twitter. As a true addict (his words) he threw his unvarnished opinions left and right into the digital world. He made a lot of enemies in the process. And yet, in real life, he is ‘a very nice boy’, as de Volkskrant once proclaimed in a heading. This reporter is forced to agree. And Brussen is a great interlocutor – because he seems to have an opinion about pretty much everything.

What do you think about the criticism levelled against universities for being left-wing strongholds?
‘Well, it’s not yet as bad as in the UK. That country is politically correct to the bone. You’re not allowed to wear a sombrero to parties because that’s cultural appropriation and every restaurant has to serve a halal menu. In Canada they now don’t want students to be referred to as he or she, since that may offend people who are – what’s the term – gender fluid. Here at the University of Amsterdam things are also getting out of hand. They now appointed a diversity officer. This is really taking it too far, you know. And the curriculums have to be revised, because they say they are too ‘white’. Well, Plato was white, just like all those other Greeks. Not much you can do about that.’

Brussen sighs. ‘The problem is when people no longer get invited because of their ideas. Like what happened in Berkeley (city in California, US, eds.), where all hell broke loose when someone from the right-wing Breitbart News wanted to pay a visit. No matter how far apart people’s ideas are, it’s important to keep talking. If universities refuse people because their ideas don’t match those of the researchers, that’s the end of free research.’

Your previous employer, GeenStijl, was recently attacked by more than one hundred Dutch female journalists and celebrities. They asked companies to no longer advertise on GeenStijl and the associated Dumpert, because their content was allegedly misogynistic. What do you think about that?
‘That’s the worst kind of journalist victimization.’ *He makes a vomiting sound.* ‘Go cook a meal or something. Or take out your trash. Pathetic Nazi behaviour. Besides, it’s completely pointless. If there is one thing that has nothing to do with morality, it’s advertisement. Take the Ministry of Defence: they have to attract three thousand new recruits every year. The profile of these recruits? Seventeen years old, secondary vocational education, and male. So where do you think they put up those ads on Internet? On Dumpert. Those advertisers are not likely to go away, I can assure you.

Once again: if you think something is misogynistic, don’t click on it. Don’t visit GeenStijl. If I write something, you don’t have to read it. Nobody is forcing you to. So what’s the problem?’

University chaplain ‘As though an arm has been chopped off’

Chair of the foundation’s board: ‘This is not a high-conflict divorce’