Home » International » A quiet alternative for the festival

A quiet alternative for the festival

The orientation festival is well on its way and thousands of students are partying in Germany right now. But there are people who prefer an alternative to the big festival. ‘This is for everyone who doesn’t drink alcohol or just prefers a dinner and board-game-night over a festival.’

Last year, between five-hundred and one-thousand new students did not partake in the festival on the weekend. This could be due to a variety of reasons. ‘I can’t attend the festival because of a medical issue.’, says Marit Otten, a 19-year old soon-to-be mathematics-student at Radboud. Others like Sermin Sahin and Anna de Vries cited reasons such as not liking parties and not drinking as their reasons to stay at home during the festival weekend. 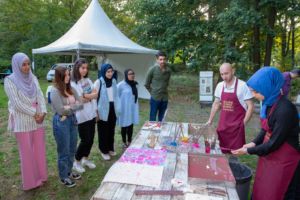 Otten, Sahin and De Vries are some of the new first-year students who attended yesterday’s official alternative to the introduction festival: a Meet & Eat organised by the university and muslim student organisation MSV. ‘This event was an initiative of the university, because they noticed there were many students who were not attending the festival and wanted to find an alternative,’ says Sarah Boulehoual, the current MSV secretary. ‘They approached us to organise an event to wrap up the orientation week that is fully vegetarian and alcohol-free, so it would be accessible to as many people as possible.’

Even though the Meet & Eat is organised by MSV, it is by no means only meant for muslim students, assures Boulehoual. ‘It was thought to be inclusive of everyone who might not drink alcohol or just prefers a dinner and board-game-night over a festival.’

Around twenty people signed up for the event held at the student chaplaincy, which besides a barbecue and board games offered henna tattoos and a workshop in Ebru, an ancient form of water marbling. The latter consisted not only of an opportunity for visitors to try water marbling themselves, but gave some insight into the philosophy of the ancient art. This combination of food, conversation and calm activities seemed to establish exactly the kind of relaxed atmosphere that the event was aiming for. 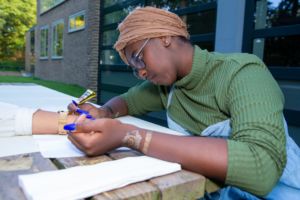 ‘I wish there would have been something like this during my own orientation week,’ says Mara Andriessen. She’s a master student of general linguistics, attended the event not as a freshman, but an interested person in its general idea. ‘It would be great to have a full programme for the people who like it a bit calmer during the orientation week, especially for people who don’t drink. This is already very nice.’

The Meet & Eat also received a lot of media attention, and not just positive. ‘For us, this much media coverage for such a small event is quite strange’, says Boulehoual. For now, the 21-year old political science student hopes that the event is continued into the next year and will stay an alternative for students not attending the festival in Goch.