Every country has its own celebrations. But what is it like to celebrate a traditional holiday far away from home? International students and staff members often find the answer to this question during their time in Nijmegen. This time: the Chinese Lantern Festival.

’I did some research’, says Alicia Zhou, leaning on the kitchen counter in her student house. ‘The festival is more than 2,000 years old. It started because Buddhist monks during the Han-dynasty hung lanterns outside on the fifteenth day of the first lunar month. The emperor saw that and decided to spread this tradition across China.’ Zhou’s friend, also crammed in the tiny kitchen, chuckles: ‘Such historical knowledge.’ He is Japanese and this is his first celebration of the traditional Chinese Lantern Festival.

‘Friends help coping with homesickness, but they can’t replace a family’

If Zhou were in her home town of Dalian, a metropolis with six million inhabitants in the North of China, she would spend the holiday with her family. Playing cards and mah-jongg, watching the gala in honour of the festival on TV, eating and catching up with everyone after a busy day. She is, however, not at home. This year she celebrates it more than 8,000 kilometers away from her family in the company of her friends. ‘Friends help coping with homesickness, but they can’t replace a family’, she says. Especially on a day like this.

As the evening progresses, Zhou’s friends — all of them exchange students like her, non of them Chinese — are arriving in the kitchen to help with the final preparations. Celebrating the lantern festival with a dinner has been a spontaneous idea by its hostess. According to Zhou, ‘the feeling of the festival is in the food’ — and it’s the best way to introduce her international friends to the traditional holiday. There is plenty of food available, ranging from Chinese hot pot, fried Chinese cabbage, and the traditional sweet desert of the holiday: Tangyuan. At the end of the dinner, everyone is full.

Besides the dinner, the festival also traditionally includes a fair. There, differently shaped and painted lanterns with riddles attached to them are presented. Everyone who solves a riddle receives a small present by the owner of the lantern, explains Zhou, while adding with a smile: ‘We used to go to the fair when I was a child.’

There are no lanterns to be seen today, but according to Zhou, this tradition is also disappearing in China. ‘People prefer to stay at home and watch the gala on TV’, she says. The lanterns are not the only tradition disappearing around the festival. Fireworks, also a traditional element during the celebration, have been banned — for ecological reasons. ‘For me, quite some of the holiday’s atmosphere is lost without the fireworks.’

The evening, without lanterns and without fireworks, has a cheerful atmosphere nevertheless. Five friends sitting around a small table, eating the Chinese dishes they helped preparing under Zhou’s instructions, talking about everything and anything. Traditional festivals of their respective home countries, the homesickness that comes with studying abroad and ways of coping with the culture shock. All of them are living in the same student house and are regularly meeting to cook together. Country-typical dishes are a good cure for missing home.

It’s not that easy, however, having half the globe between ones family and the own dinner table. ‘My parents have sent me pictures of their dinner today’, Zhou says. ‘It’s hard, because I miss them so much.’ Even with traditional dishes and in good company. During a calm moment of the evening, next to a Dutch student kitchen filled with smells of Chinese food, she says: ‘When I sleep, I dream of them.’ 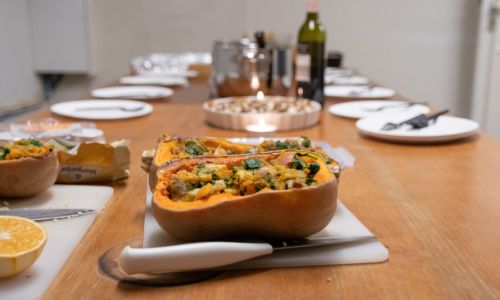 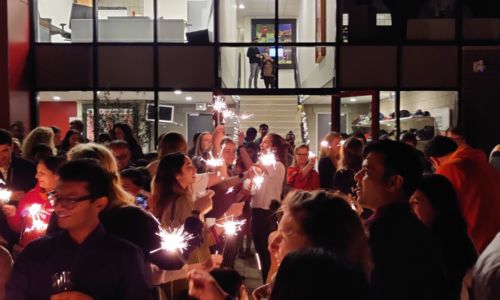