Home » International » ‘In seems the Corona crisis has shown that we need more Europe, not less’

‘In seems the Corona crisis has shown that we need more Europe, not less’

OPINION - The Corona crisis has revealed many weaknesses in European solidarity and policy responses, says international economist Frank Bohn. ‘If the challenges are not met, there will be serious threats for Europe with respect to its role in the world and its internal cohesion.’

Not only was there a lockdown of social activity, business and travel during the beginning of the Corona crisis, it seems that our foreign policy, too, was in lockdown mode. This is surprising because the need for foreign policy was apparent given how some countries were hit by the pandemic and that most countries responded nationally or even nationalistically. This article explores three political economy aspects of foreign policy failures and formulates questions and warnings for policy makers.

China, where the pandemic originates from, showed in its response to Corona the weaknesses and strengths of a totalitarian regime. Doctor Li Wenliang who has died in the meantime and had warned the public before was criminalised by Chinese authorities. However, once the outbreak was acknowledged, China responded ruthlessly and effectively.

China’s interaction with the international community is even more interesting. After all, China succeeded in making the WHO (World Health Organisation) downplay the risk potential of Covid-19 and delaying its classification as a pandemic until 12 March 2020, when the daily death rate in Spain and Italy had already reached almost 50 and 200, respectively. Unfortunately, no major Western leader dared to criticize the WHO publicly, except for Donald Trump who may be accused of being more interested in using his critique to advance his re-election bid and divert attention from his own mismanagement of the crisis. It may not be the right moment to undercut the functioning of the WHO, but it is noticeable that the WHO praises China despite her dissimulation tactics.[1] 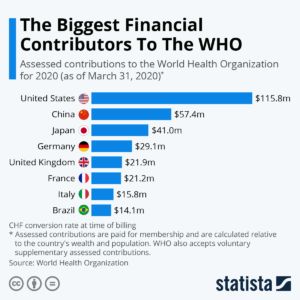 At the same time, critique, for instance coming from Taiwan, was fenced off by the WHO because China prevents Taiwan from being a member of the WHO. Taiwan had also been exemplary in its response to the pandemic while not requiring a lockdown. However, instead of learning from Taiwan, Taiwan is not admitted at most WHO expert meetings because Western countries are very “considerate” with respect to Chinese sensitivities. On 16 April 2020, German Foreign Minister Heiko Maas was asked on German TV, if Germany is turning a blind eye. He said: ‘We do not think so.’ In the remainder of the interview, he refused to take a clear stance vis-à-vis the WHO.

This is surprising. There is a crisis which has revealed the weakness of an international organisation, but the foreign minister of a major Western country refuses to even criticise the WHO or China. If China gets away with putting the WHO under pressure, then why should she not try to push for a final resolution of the Hong Kong crisis by crushing the opposition. Does the cowardice of Western politicians not invite authoritarian countries to destroy their own democratic opposition and to intimidate smaller (neighbouring) countries?

We can make several observations about the outbreak in Europe. First, many countries have responded to the pandemic too late. When it broke out in Spain or Italy, the reason may have been that they were misled by the WHO and China to believe that it was actually not a pandemic. This excuse can, however, not be used for countries that were affected heavily, but with some delay, like the UK. Many countries were simply not prepared.

Second, solidarity between European countries was lacking. Poland and the Czech Republic closed their boarders to Germany in mid-March on very short notice, originally even preventing medical personnel from doing their job in German hospitals. On 4 March, Germany had already banned exports of protective medical equipment. That was when there were already 2500 confirmed infections and 80 death in Italy. It took until mid-March until Germany began so send equipment to Italy.

However, the Russians and Chinese had been much faster. This had a disastrous effect on the Italian psyche; there was a feeling of being left alone by its European partners. For many Italians, that was a déjà vu within 10 years. At the beginning of the 2010s, i.e. before the actual European migration crisis, there was a large influx of migrants across the Mediterranean into Italy. Already then had Italy asked for European solidarity, in vain.

The political economy consequences of such behaviour are enormous. The feeling of being left alone weighs more than some billion Euros that are given to Italy. In fact, it made Germany accept some communalisation of debt which it had staunchly objected to for years. Maybe the feeling of guilt (a feeling not uncommon in Germany) paved the way for this change of policy. It will be hard for the remaining opponents of common European debt, the Netherlands, Austria and Finland, to fend off such a measure without risking to break the Eurozone.

The other consequence is that in Italy, for instance, support for the EU has shrunk to 30%, an all-time low. This plays into the hands of Matteo Salvini from the Euro-sceptic Lega and might give him a victory in the next Italian elections. Even if Italy did not leave the EU, it could make them conduct ruthless fiscal policies. As in 2019, Italy could ignore European fiscal rules. The long-term consequences of the threat of a Italian debt crisis, if not default, could be used by a possible Lega government.

Corona has also hit South America and some parts of Asia very hard. Obviously, poverty, cramped housing conditions in slums and poor medical facilities play into the hands of Corona, not to mention policy failure à la Bolsonaro in Brazil. I expect that it will soon become apparent that Africa, not just South Africa, will also be affected very badly.

In all these countries, I do not have hope that the virus can be contained. I am also not sure, if there is much we can do, except for trying to help improve the health facilities. This should also be in our own interest. More Corona cases means that there will be restrictions, possibly lockdown, affecting the economic viability of millions of people. Obviously, many of them will start thinking about following others on the route to Europe. We can, therefore, expect a major exodus from Africa. I am not sure that European politicians have this on the cards.

Overall, the Corona crisis has revealed many weaknesses in European solidarity and policy responses. If the challenges are not met, there will be serious threats for Europe with respect to its role in the world and its internal cohesion. Can we retain some level of credibility with respect to guaranteeing the impartial functioning of international organisations and protecting countries like Taiwan or the democracy movement in Hong Kong? Can we prevent the disintegration of Europe by showing solidarity with respect to the (Southern) countries that suffered most (without giving up fiscal discipline), but also with respect to an upcoming new migration crisis? All in all, it seems that the Corona crisis has shown that we need more Europe, not less.

[1] “The prevention and control measures have been implemented rapidly, from the early stages in Wuhan and other key areas of Hubei, to the current overall national epidemic,” is stated on page 14 of the “Report of the WHO-China Joint Mission on Coronavirus Disease 2019 (COVID-19)” which was published on 28 February 2020.

Frank Bohn is Assistant Professor at the Department of Economics and Business Economics, Radboud University. He works in Political Economy and International Economics. He worked and studied in Toulouse, Bonn, Princeton, Heidelberg, Essex, Dublin und Nijmegen. In the last two years he has published in journals like Public Choice, PlosOne, Review of International Organizations and Economic Inquiry.