A new city, a new study programme: orientation week is thé moment to make new friends. Some of those friendships survive the tumultuous time after orientation. Like the one between Funs Elbersen and Emma Janzing, who met during the 2013 orientation week.

Emma: ‘I am not sure at what point we really started talking, but I think it was day 1. What I do remember, is that at some point, we were the only ones left in the El Sombrero, do you remember that?’

Funs: ‘You do know that this will be published on a website, right? I remember having to cycle back and forth a lot, and that I was cycling next to Emma for quite some time. She had already studied for a year and I have always done a lot of extracurricular activities, so we both weren’t very nervous.’

Emma: ‘On top of that, we are interested in the same things.’

Funs: ‘We are both very political. Both of us watched a lot of Pauw en Witteman (a late night show, ed.) and we both read a lot. It was easy for us to talk about other things than orientation stuff.’

Emma: ‘And we laugh a lot. That is the strongest thing about our friendship, we are always laughing.’ 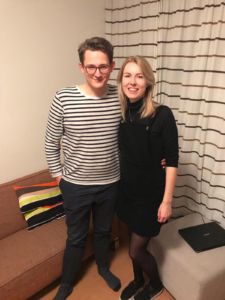 Funs: ‘Our humour is quite sarcastic and we like to make fun of ourselves and the world.’

Emma: ‘During our time at university we have lived in the same house, we studied together, worked together…’

Funs: ‘I saw how Emma studies law on top of her political science programme and after talking to her about that, I decided to do the same.’

Emma: ‘When I went to study in South-Africa, something that Funs did not approve of, he organised a goodbye dinner for me and invited my family and friends. He made some good food as well, that was really nice.’

Funs: ‘A significant part of me did not agree out of selfishness. We both did a double programme and because of that, we could support each other. When Emma went to South-Africa, I thought “there goes my library buddy”. But eventually, the time passed quite fast. Now, my new goal is to keep Emma out of diplomatic service. Maybe I should find her a job at my current employer, the courthouse in Arnhem.’