Professor of Plant Ecology Hans de Kroon is known for having drawn attention to the dramatic decline of the insect population. His next move is to marshal even more academic expertise in an effort to improve the sustainability of landscapes in the Netherlands. He plans to achieve this through Healthy Landscape, a Nijmegen-based consortium made up ecologists, lawyers and others.

‘I’m so proud of that letter up there,’ says Hans de Kroon in his office in the Huygens Building. The professor of Plant Ecology points to a print-out of an opinion piece in NRC published last month. The headline is reads Stikstofreductie en duurzaam natuurherstel kunnen samengaan (‘Nitrogen reduction can go hand-in-hand with sustainable environmental restoration’). De Kroon wrote it with 13 other researchers at Radboud University, including Marja Spierenburg, professor of Development Studies, and Lotte Jensen, professor of Dutch Cultural and Literary History.

The article is one of the first tangible outputs from ‘Healthy Landscape’, the interdisciplinary research consortium that all the signatories of the letter are part of. De Kroon launched the campus-wide consortium in early 2019, with experts from almost every faculty.

The objective is to bring Nijmegen’s scientific expertise to bear on making the Dutch landscape more sustainable. It’s a hot topic these days, given the current Nitrogen crisis. ‘There’s so much expertise on environmental restoration here on our campus. We want landscape managers to be much more aware of it. That includes provincial governments and water authorities, but also environmental organisations and the agriculture sector.’

The Nijmegen consortium is still in its launch phase. Healthy Landscape has received funding from the Executive Board for two staff members. Over the next two years they will ensure that the participating faculty institutes really start working together. After that the project needs to be financially sustainable, which it might do by securing external contracts, for example.

According to De Kroon, the Netherlands implements many environmental measures but it isn’t clear how effective these actually are. At the same time, those measures do have an impact on the landscape and its inhabitants, and they cost money. ‘Take wildlife bridges, for example. We create them in order to connect two areas, but there’s barely any monitoring of what effect they have. How many animals use them?’ And sometimes a particular measure will work in one place, but not in another.

The idea is that if you can give stakeholders an insight into why that happens, they can go about their work more effectively. For local and provincial authorities, access to that kind of practical guidance is almost like the Holy Grail, says De Kroon. ‘But you need multidisciplinary research to deliver it, and that’s exactly what we want to drive forward.’

De Kroon emphasises that Healthy Landscape wants to do more than just give ecological advice. That’s why the consortium includes lawyers and historians. ‘If it were all up to us ecologists, it would be easy. But the reality is different, and it’s not just about what is best for the environment.’

Many environmental regulations have a significant legal component, for example, particularly after the Council of State’s recent ruling on Nitrogen. This ruling means that if, say, a construction project causes environmental damage, then that must be directly compensated for through environmental restoration work somewhere else. The matter of how to satisfy that restoration requirement is expressed in legal terms. ‘A lawyer will know exactly what a judge is looking for, and what the legal requirement is,’ says De Kroon. ‘We want to combine that legal perspective with the best academic expertise.’

An end to hunger

And what about historians? According to De Kroon, they can share the history of a particular region or a specific industrial sector. The recent farmer protests about the Nitrogen issue clearly show that this is not something you can brush aside. ‘The reason our agriculture sector has developed into one that maximises production and minimises costs can be traced back to the aftermath of World War II and the vow that we would never be hungry again,’ says De Kroon, himself the son of a farmer. That sentiment is ingrained in all farmers. You have to take that into account.’

At the same time, he says, it’s also clear that something has to be done, and the environment can actually help us with that. ‘It’s not the environment’s fault that we’re in this position; rather, it’s because for so long we turned a blind eye to the consequences of intensive agriculture. For decades, the attitude was: we’ll come up with something.’

That’s not good enough anymore, and Healthy Landscape can help come up with solutions, according to De Kroon. ‘We really can add value.’ Time will tell if farmers, country folk and those who live in ivory towers will actually be able to find common ground. 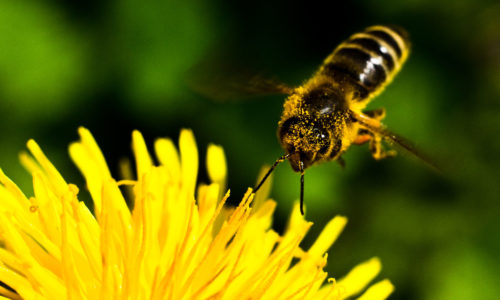