Home » Dossiers » Heumensoord » Refugees at uni: ‘We want to work’

Refugees at uni: ‘We want to work’

Waiting, waiting and more waiting. Most of the asylum seekers in Heumensoord are getting tired of it and are eager to work on their futures. Two participants of the lecture series for asylum seekers in the Grotius building share their dreams.

Manal Abdullatif (25), who came to Heumensoord with her parents in October, dreams of becoming an English teacher or a translator.
‘I’m from Hama, two hundred kilometres north of Damascus, where I spent two years working as an English professor at the university. I have a Bachelor’s degree and was working on getting my Master’s degree in English linguistics. In Syria, it’s quite common for Master’s students to teach. I finished my first year, before the situation forced us to flee. In Heumensoord, I frequently get asked to translate for people. I’m happy to do it because I want to help. But I don’t teach; most people are more interested in learning Dutch. I hope to finish my Master’s in English Linguistics here and plan on contacting the UAF Foundation for Refugee Students. I haven’t done it yet because of our situation. But then I heard some good news: two days ago, our asylum-seeker status was approved. I’m so happy! We’re not sure where we’ll go, but we’ll find out more soon. My dream is to become an English professor or a translator. I had originally planned to continue my professorship, but I realise how important translators are. I speak fluent Arabic, good English and plan to learn Dutch. I think this will be a real advantage.’

Aziz Arrafa (18) came to the Netherlands alone in December and has lived in Heumensoord ever since. He dreams of becoming an engineer in Damascus.
‘I’m glad I can attend lectures at the university and look forward to studying again soon. I fled Damascus when I was seventeen and then worked in Turkey for a year to save for the trip to Europe. I worked hard and had no time to study. My dream is to become an engineer in Damascus and I won’t stop chasing that dream. I want to build houses, bridges and hospitals. I’d love to help rebuild Damascus when Syria is safe. A lot of the infrastructure was destroyed and the buildings could use a modern update. There aren’t many buildings like this one [Grotius, ed.] there. I’d like to help modernize Syrian architecture. Although I haven’t done much research on becoming an engineer here in the Netherlands, I’m sure I can fulfil my dreams. But my asylum-seeker status needs to be approved before I can study. I have no idea how long that will take, but we’ll see how it goes.” / Tim van Ham & Martine Zuidweg 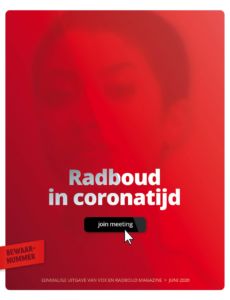