Omar Najem couldn’t believe his luck when he opened his own dental practice in Nijmegen earlier this year. After years of uncertainty, the Syrian refugee dentist can finally do what he loves best: help other people.

Enthusiastically Omar Najem (36) leads us through his dental practice on the Prins Hendrikstraat, in Nijmegen-Oost. ‘This is the waiting room, that’s the surgery, and here’s the X-ray room.’ He’s delighted with everything in the elegant building, including the staff room.

The practice has been Najem’s since 1 April. He took over from the late dentist Joost van Vlijmen. ‘It was a real honour’, says Najem. ‘And also a bit scary because Joost wasn’t just any dentist.’ Radboud University alumnus Van Vlijmen ran the practice for 40 years. In the summer of 2019 he still appeared in alumnus magazine Radboud Magazine and talked about his experiences on the Mongolian steppe, where he went every year to help nomad families with their dental problems. At the end of that year, he died suddenly, aged 65.

Helping other people, that’s what it was all about for Van Vlijmen. And for Najem. It’s what he was doing in his home country before the war, and after the uncertainty of the past years living as a refugee, he’s keen to continue doing this in the Netherlands. Following a few good talks with Van Vlijmen’s heirs, he got the green light and Practice Najem became a fact.

For the Syrian, this is a dream come true. The second time that this dream has come true, in fact. Before the war broke out in his homeland in 2012, he already had his own practice in a suburb of Damascus. Alongside his practice, he also worked as an oral surgeon in the city hospital. But he lost all of this at the end of the first year of the war.

‘I was suspected of helping an enemy of the state’

‘My home and practice were destroyed in a bombing raid,” explains Najem. ‘My family fled, some to Yemen, others to Turkey. I didn’t want to leave, I wanted to stay and help people.’

Despite Najem’s commitment and perseverance, his situation grew increasingly hopeless. He hit rock bottom when the police arrested him out of the blue on the street in the spring of 2013. ‘I was suspected of helping an enemy of the state, they said. It turned out to be a 14-year-old boy whose broken jaw I had operated on a few days earlier.’ He pauses and sighs. ‘A 14-year-old boy, an enemy of the state…’

And so the dentist ended up in an obscure jail in Damascus, where he remained for months without any form of trial. ‘I can assure you the prisons there are very different from those in the Netherlands. My cell was filthy and had no windows. The only thing I could hear where bombs exploding and gun fighting. I couldn’t sleep at all.’

After his family paid a handsome ransom Najem was finally released. He decided to flee to a safer place. He had no plans and no documents. ‘I simply had to get as far away from the war as possible. But I couldn’t go anywhere: my passport had been taken off me in jail. I decided to go north and cross the Turkish border. To get there I had to swim across a river in the middle of the night.’

‘I was not afraid for human traffickers, I was more afraid of the war’

In Turkey Najem contacted his relatives who had fled there earlier and through them arranged to get the documents he needed to fly to the Netherlands. Not official documents, mind you: Najem had to pay €8000 for a fake passport. ‘You hear a lot of nasty stories about human traffickers extorting money from refugees and abandoning them to their fate. But to be honest I wasn’t afraid. I was more afraid of the war.’

Focus on the future

Najem ended up in an asylum centre in Drachten, where he decided to make a new start. ‘I discovered that I was suffering from post-traumatic stress syndrome (PTSS) because of my time in prison. I kept hearing the sounds of the war. But I wanted to make a fresh start. I decided I wanted to start helping people again here in the Netherlands.’

Najem got better, in part thanks to sessions with a psychologist. He could once again focus on the future. ‘I read that the dentistry programme in Nijmegen had a good reputation, so I came here. I followed a Dutch language course at Radboud in’to Languages. I couldn’t find work at first, so I worked on volunteer projects, to get to know the city and learn the language.’

‘In The Netherlands there are a lot of rules, in Syria you just start drilling straight away’

‘What I really wanted was to work as an oral surgeon, but my Syrian diploma wasn’t valid here. Through an institute in Amsterdam, I obtained the diplomas needed to register as a dentist. Soon afterwards I started working in dental practices in Culemborg and Tiel. Unfortunately I couldn’t become an oral surgeon: that would have required five years of medical study.’

Last April, he finally got his own practice. ‘I had to get used to it. Here in the Netherlands there are lots of rules, and everything has to be written down and recorded.’ He laughs. ‘In Syria, you just start drilling straight away.’

‘People here also have more medical knowledge. They respond critically to what I tell them, or they ask for more details about a suggested procedure. Don’t get me wrong: this is a good thing! It can only benefit quality of care.’

For Najem, 2020 was a dream year. With thanks to Van Vlijmen, who helped his dream come true even from beyond the grave. 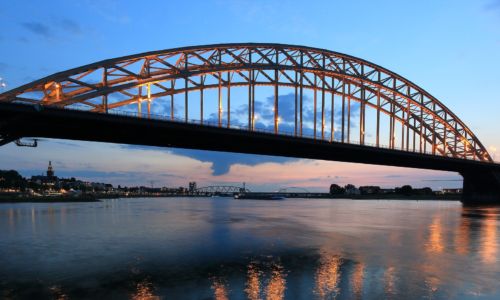