Home » English » Niksen or: Why students should be doing nothing more often

Going for a nice walk in the autumn sun or drinking a hot cup coffee without hysterically typing on your laptop? These moments can be rare when deadlines and exams are approaching, but doing nothing – or niksen in Dutch – might be just the solution you need.

All over the world, people have an expression for the concept of doing nothing. The Germans call it ‘die Seele baumeln lassen’ (‘letting your soul dangle’), the Italians talk about the ‘dolce far niente’ (‘the sweetness of doing nothing’), and in the Chinese philosophy of Daoism, doing nothing has an even longer tradition called wu wei.

‘I found that niksen has less to do with Dutch culture and more with human nature’, says Olga Mecking, a Polish writer who has published a book about the Dutch concept of doing nothing – niksen – that has recently gained more media attention. ‘Humans are lazy’, Mecking says. ‘We tend to look for ways to do things with the least amount of effort. This laziness – this niksen – is something that connects all of us.’

What we do when we do nothing

The concept of niksen originates from the idea that we take time in everyday life to do nothing. But what are we doing exactly when we are doing nothing? After all, we constantly do something – even when we are asleep. According to Doreen Dodgen-Magee, a psychologist who studies boredom, a person doing nothing is most adequately compared to a car standing still with its engine running. In other words, niksen is not about sitting still for an hour without thinking about anything. It is about doing something that does not fulfil a purpose – for instance, watching birds chirp or going for a walk.

But what about niksen is so beneficial? According to Mecking, there are many advantages of doing nothing: ‘I found that niksen benefits our mental health, our productivity and our creativity, as well as on our ability to make decisions.’ And, especially interesting for students, niksen also positively affects the ability to memorize.

‘When we are doing nothing, the brain is busy transforming what we learned into a more stable and long-lasting form.

‘Niksen is a brain state in itself that is associated with memory consolidation’, says professor Erno Hermans from the Donders Institute for Brain, Cognition and Behaviour. ‘When we are doing nothing, we activate a set of midline regions in the brain called the ‘default mode’ network. This network is involved in the processing of information.’ In other words: when we are not actively learning something new and instead take a break from studying, the brain is busy memorizing and transforming what we learned into a more stable and long-lasting form.

Now is the best time to do nothing

But despite its practical uses for memory consolidation, especially the positive impact of niksen on students’ mental health is dearly needed nowadays: according to a 2021 report by the National Institute for Public Health and the Environment (RIVM), 97 percent of students are experiencing stress, a majority even severe stress. The students link their high stress levels specifically to their study programme or a more general performance pressure.

Anne Speckens, Professor of Psychiatry and director of the Radboudumc Centre for Mindfulness, is aware of the students’ struggles. According to Speckens, what might help when facing performance pressure is to take a step back and leave the autopilot behind: ‘We tend to live our lives by our agendas. But sometimes it is important to stop following our automatic patterns and be mindful of the here and now to realize how we feel and think.’

According to the professor, we can make more deliberated decisions when we stop following these automatic patterns: ‘It is important to set your own priorities rather than try to meet the standards that others have set. Not doing everything all the time might just create the space in your life to enjoy it.’ And niksen, Speckens says, is a step in the right direction.

Additionally, the very nature of niksen can make it a doable endeavour: especially with assignments and exams approaching and days spent hovering over papers, doing less rather than more can be a good solution, according to Mecking. ‘There are so many wellness trends that tell people that, when feeling burned-out, they should do yet another thing on top of the tasks that are overwhelming them. Niksen, on the other hand, is not about doing yet another thing. It is about doing less.’ 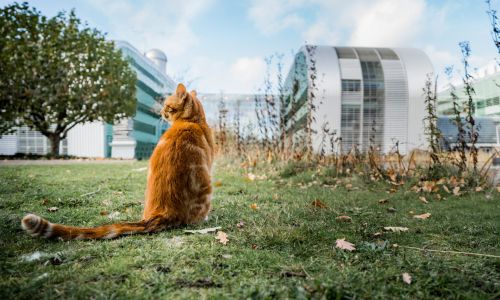 ‘Huygens cat’ is a very welcome guest at the science faculty