There are always so many things going on inside our heads. And at times, we’re the ones responsible for confusing our brain activity. Have you ever wondered how alcohol, Ritalin, pornography and sleep deprivation affect the brain? 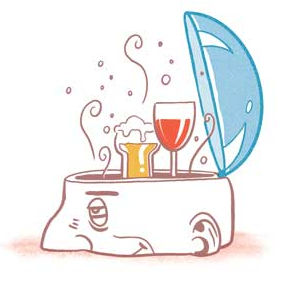 All kinds of things start happening in your brain after a few beers. Like laughing gas, alcohol affects NMDA receptors (see laughing gas box) and the fuddled brain produces more dopamine and serotonin, hormones that improve your mood. Alcohol also affects the gamma aminobutyric acid (GABA) neurotransmitter, which binds to special brain cell receptors and signals these cells to slow down. In this way, GABA inhibits communication between brain cells. Alcohol binds to the same receptors and gives GABA an extra push to latch on, more and for a longer period than in a sober brain. The brain hits slow down even more, resulting in a relaxed state – but also in slower reactions, uncoordinated movements and less impulse control. British Psychopharmacologist David Nutt has studied GABA for years, in the hope of developing a healthy alternative to alcohol: a drink that would induce the same relaxed feeling by directly stimulating GABA, but without hangovers and other health risks associated with alcohol. His fellow researchers remain sceptical, if only because alcohol stimulates the brain in many other ways than via GABA. 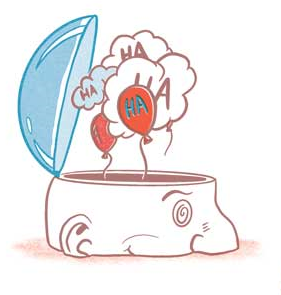 As early as 1800, British chemist Humphry Davy organised ‘laughing gas parties’. A great night out for his visitors, and an opportunity for him to study the effect of the gas. One of his conclusions was that laughing gas acts as a painkiller, which is why dentists use it as an anaesthetic. It also briefly creates a state of euphoria – sometimes accompanied by laughing fits. The reason for this is that laughing gas is an NMDA antagonist, explains Radboud university medical center (Radboudumc) Addiction Physician Thomas Knuijver. Normally, NMDA receptors in brain cells attract the signalling agent glutamate, which plays a key role in processing sensory stimuli. But laughing gas blocks these receptors, temporarily preventing glutamate from getting through. Knuijver: ‘This results in a short-term dissociative effect, comparable to the effect of the drug ketamine, except that with laughing gas, the dissociation period is shorter.’ Can frequent use of laughing gas lead to brain damage? ‘Not as far as I know,’ says Radboudumc Internist and Clinical Pharmacologist Kees Kramers. However, he does warn that overenthusiastic inhalation may damage the nerves. In 2017, doctors in Heerlen described two cases of young people suffering from uncoordinated movements and tingling and numbness in their hands and feet. These symptoms resulted from laughing gas depleting the body of vitamin B12, and disappeared when the two stopped sucking on balloons. The National Institute for Public Health and the Environment (RIVM) warns that inhaling ten or more balloons per session, at a rate of once a month or more, increases the risk of developing this kind of vitamin deficiency. 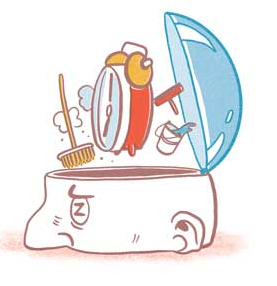 As early as 1959, a radio DJ decided to sit in a glass booth for a good cause. The American Peter Tripp ran a 201-hour radio marathon from Times Square in New York – without any sleep. The first days were easy, but over time, Tripp became increasingly irritable and started hallucinating. He suffered from psychoses for years afterwards. Our brain really needs sleep; this much is clear from the radio experiment. Ultimately, sleep deprivation can even prove fatal, as shown in studies where animals are kept awake for long periods of time. Sleep is as crucial to life as air, water and food, writes Radboud University Professor Emeritus Ton Coenen in his book Het slapende brein (‘The Sleeping Brain’). But why? Explanations vary. Some researchers say that when we sleep our brains store crucial information about our day in our memory, a kind of nightly tidying up. Other researchers say the sleeping brain engages in another kind of major clearing out. Coenen describes this theory as follows: ‘Physical and mental processes lead to an accumulation of toxins in the brain.’ During the night, the brain supposedly breaks down and eliminates these toxins, like lactic acid and carbon dioxide. Or maybe it’s something else entirely, something researchers haven’t discovered yet. But just to be on the safe side, don’t stay up too many nights in a row! 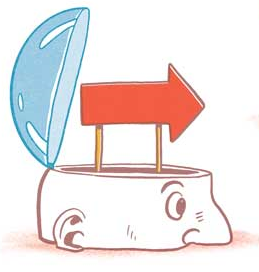 Methylphenidate – better known under the trade name Ritalin – helps ADHD patients to focus. Some believe that even if you don’t have ADHD, Ritalin is a great tool for focusing when studying for your exams. Ritalin impacts the brain chemicals dopamine and noradrenaline, explains Brain Researcher Monja Froböse, who completed her PhD in Nijmegen last October. Too much or too little dopamine and noradrenaline in your brain leads to problems, but in ‘limited’ doses both chemicals improve concentration, motivation and mood. Some studies seem to indicate that ADHD patients suffer from a shortage in the frontotemporal lobe, an area of the brain involved in concentration and planning. Dopamine and noradrenaline are released via synapses, i.e. contact points between the ends of brain cells, and travel to the next brain cell, which they activate in turn. Froböse: ‘But the next cell can’t absorb all the released chemicals, so the surplus goes back to where it came from.’ Ritalin blocks this reabsorption, so dopamine and noradrenaline can no longer activate the next nerve cells. Whether Ritalin improves performance depends on the task, says Froböse. ‘Ritalin makes it easier to ignore distractions, but it doesn’t make you more creative or flexible.’ And in people who naturally produce a lot of dopamine, the drug may even have no effect at all. Nor does Ritalin necessarily motivate people to work hard, as Froböse shows in her PhD research. Test subjects were asked to perform a series of tasks with and without Ritalin, and each time they were given a choice between an easier and a harder version of the task. Ritalin had no effect on performance, but impulsive people, when on Ritalin, were more likely to avoid the difficult tasks. So using Ritalin to help you study may not be such a good idea. Before you know it, you’ll be skipping all the difficult chapters.