What ‘kudos’ can do for your motivation and sports pleasure

Do sports apps like Strava make exercise more fun or do they get in the way of pleasure? And how do they affect motivation? Vox editor and amateur cyclist Ken Lambeets got on his bicycle and explored the ‘athletes’ Facebook’.

1 January 2021. New Year’s resolutions. For the first time in my life, I signed up for Dry January. I plan to get rid of some excess belly fat and improve my fitness. I also want to find out whether sports app Strava can help me achieve these goals.

Strava is popular as a training logbook among runners, cyclists, skaters, rowers and swimmers. At the same time the app, released in 2009, also forms a social network where other users can like and respond to your training scheme.

Strava offers insight not only into your own sports performance, but also those of your friends or other athletes you follow. If you train on the same track, you can even compare times. The Strava user who runs, cycles or skates fastest on a particular track gets a crown next to their name, with the title King (or Queen) of the Mountain, abbreviated to KOM (or QOM). This is a real honour, particularly among cyclists.

21 January. It’s 7⁰, but it feels much colder. I cycle via the Ooijpolder to Millingen aan de Rijn, only to turn around and cycle back along the winter dyke, with the wind blowing in my face. I huff and puff all the way to Nijmegen.

Once home I complete my ride in Strava with the title ‘Adieu Ullrichwinter’ and get 12 kudos. In the comments someone asks about the wind direction, someone else ironically calls me a ‘winged climber’. My first bike ride of the year, and I already feel like a real cyclist.

This isn’t so strange, says Rob Franken, a sociologist completing his PhD dissertation at Radboud University on the potential of online sports networks. He studies members of running associations who form a group on Strava. ‘My research shows that runners who get more kudos tend to run more often. We also see that people tend to train more often if their online friends train more than they do.’

Sociologists Hidde Bekhuis and Jochem Tolsma reached a similar conclusion after studying the participants in the 2019 Seven Hills Run. The researchers followed a group of athletes via Strava. ‘Some of them got kudos from us, others didn’t,’ says Bekhuis. ‘What we found is that the group that got kudos was more likely to take part in the next edition of the Seven Hills Ride. Apparently, a thumbs up does wonders for people.’

30 January. I’m cycling for the first time with a GPS that displays my cycling speed in real time. On certain segments that I selected myself, like the infamous hills on the Oude Holleweg and the Van Randwijckweg in Beek, I try to break my own and my friends’ record. You can guess what happens: I try to cycle as fast as possible to impress my followers.

‘We didn’t look at the athletes’ awareness when they use sports apps,’ says Bekhuis, who in addition to being a sociologist is also a triathlon athlete and was performance manager at the CCC Liv Team when Marianne Vos was on the team. ‘But we do know that new gadgets like pedometers have a positive effect for about six months. After that the novelty wears off and the pedometer disappears into the drawer. With Strava, this is less likely to happen because of the social aspect.’

20 February. Early in the saddle for a ride to the Posbank, a famous climb among cyclists near Arnhem. By 9.30 a.m. I’ve got the viewpoint over the entire Veluwe all to myself. Wow! Afterwards I post a picture on Strava and get lots of kudos and comments.

‘Apparently, a thumbs up does wonders for people’

I seem to have discovered Strava’s motivating effect. Franken explains that a training logbook feature is also available in many other apps or in Excel. ‘But what makes Strava unique is that it combines these features with a social network. This is why Strava is sometimes called the ‘athletes’ Facebook’.’

4 March. For the third time this year I cycle up the Van Randwijckweg, the first climb in the 2016 Giro d’Italia that included Nijmegen and surroundings. In the first section I step up the pace, while trying to keep enough breath for the steep section. I climb out of my saddle, sway the bike from left to right, take it down one gear, sit down for a moment, then take it up a gear again. Personal record! And the 8th best time among the twelve people I follow, I find out when I get home. Something to be proud of.

I seem to thrive on a bit of competition and not be entirely immune to the social pressure that Strava brings. ‘The people around you aren’t just a good yardstick to measure your performance by,’ says Franken. ‘Many Strava users actually want to perform better than others.’

18 March. Short ride, heavy legs. These past weeks I’ve barely made any progress. Will I ever be able to match the tempo of the other cyclists in my timeline?

This is a pitfall many amateur athletes fall into, I discover when I talk to Bekhuis.

Professional athletes who monitor everything sometimes wonder what they are doing it for. ‘If you have to constantly monitor your speed, heartrate, wattage and nutrition, you run the risk of missing out on the experience of cycling. Personally, I’ve learnt how to deal with the statistics, but that’s not the case for everyone. As an amateur, you should beware of becoming obsessed with all the data.’

15 April. A few days before the Amstel Gold Race I load my bicycle into the car at 6 a.m. In Maastricht I get on. It’s cold and the sky is clear. On the South Limburg hills, I enjoy the hairpin bends, the woods and the panoramic views, and for a while I couldn’t care less about the odometer. Why should I compare myself to others? This is what cycling is all about: the freedom, the view, my mind so quiet and peaceful. ‘Best ride of the year (so far)!’ I write on Strava. Hopefully to be followed by many more. 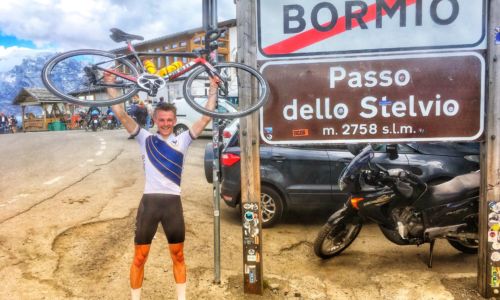 These athletes give their best for their timeline