To prevent further spreading of the coronavirus, there will be no lessons or exams at Radboud University today. The campus appears empty.

16.20 hours. Professor for Dutch and Academic Communication Marc van Oostendorp is working on the CoronaCollege, an online platform where lecturers can share their videos. ’This is a good opportunity to let outsiders see what the universities are currently working on precisely’, he said to VOX.

16.10 hours. The skiing trip of study association Studievereniging Psychologie Nijmegen (SPIN) to the French Les Deux Alps will not take place. ’Under normal circumstances, we would have left at 18.00 today. But because both the faculty and the Director of Education have voiced concerns and after our own evaluation of the situation, we decided to stay at home’, says president Mémé Satter.

Because of this decision, the members of SPIN are risking to lose a lot of money. Because a negative travel advise hasn’t been implemented for France, they weren’t considered for financial compensation by the travel agency.

’Luckily, the faculty’s dean has been very helpful’, according to Satter. ’We have now come to an agreement that SPIN is going to cover part of the 35 members costs. With support of the faculty.’

15.00 hours. Up until now, four Ph.D. defences at Radboud University have been cancelled because of the coronavirus. Affected are the defences of Midas Meijs, Ilja Diets, N. Dijkstra, and E.Z. Azar.

The lecture by Rob van Lier, which was supposed to take place this afternoon, has been cancelled. Lectures by Gert-Jan Hendriks, Robin Nijveldt and Debby Gerritsen will be postponed to a later date.

14.27 hours. Many experiments on campus have been canceled, but the BSI-lab stays open. Here, psychologists are doing research on human behavior. ’My current experiment is coincidentally about the coronavirus’, says the German psychology-student Philipp Esslinger. ’Participants have to determine as fast as possible whether people shown to them on screen look like they are Dutch, Moroccan or Asian. After that, we let participants read a news report about the coronavirus. We expect that they will afterwards be able to identify Asian-looking people faster because of the fear of the virus.’ Esslinger now says that the experiment is not valid anymore. ’We started designing this experiment a month ago, when the coronavirus had still only occurred in China. Now people all around the world have been infected.’

The participants of the experiment received a message that they were able to come as planned today. ’I had some concerns, but I came in the end’, tells International Business Administration-student Emilija Mantrimaite. ’Today was the fourth and last time I was supposed to come to participate. It would have been a shame to not be able to finish it.’

Starting Monday, all experiments at the BSI-lab, the Donders Institute, and the Max Planck Institute will be shut down. ’We are currently busy informing everyone’, says Tildie Stijns from the Donders. The stop to experiments will certainly hold on until the 4th of April.

13.25 hours. Every disadvantage always comes with some kind of silver lining. Student and racing cyclist Gosse van der Meer took the chance of an empty campus to skateboard through the hallways of the Erasmus and Elinor Ostrom building today.

13.20 hours. On the Nijmegen School of Management’s Instagram-page, some students are poking fun at the corona-issues at Radboud University.

13.10 hours. People are having lunch as usual on campus. There are just less people around. Some parts of Het Gerecht and Restaurant FNWI where people are not supposed to sit have been closed down. Consequentially, many people are sitting on a small amount of space. De Refter has closed down some of its tables. Employees and students are having lunch like usual, despite a request to ’try to limit food consumption to your own workplace.’

12.27 hours. Radboudumc has put a pause to medical residencies. Medicine students are asked to sign up for a flex pool so they can be employed in order to help ’assist with the care process.’ That reports De Gelderlander. What the consequences for the study progress of the affected students is going to be, is still unclear.

11.58 hours. The Grotius building is quiet as well today. ’We can count the amount of customers on two hands today’, says a Coffee Corner employee. There are no more than ten people at the law library.

Until the 1st of April there won’t be hot meals served at Het Gerecht. There are a maximum of 99 people allowed inside.

11.37 hours. ’Let us know if you’ve been infected with the coronavirus and keep the hallways clean.’ This message was send out by SSH& to its tenants.

SSH& is following the guidelines of RIVM (National Institute for Public Health and Environment, ed.) and the Dutch government, says spokesman Vincent Buitenhuis. As of now, the rental agency doesn’t know of any tenants infected with the coronavirus. ’We are asking tenants who turn out to have the coronavirus to notify us’, says Buitenhuis. ’Then we can make sure to take the necessary distance if something has to be repaired and flatmates can be informed.’

Buitenhuis is furthermore asking tenants to keep the hallways as clean as possible in order to keep diseases out. Cleaning more often is not an option: SSH& is thinking about letting their cleaners do less rounds. ’We are concerned about the risks our cleaners are exposed to. They are entering rooms and hallways of our students. If a sick student is sneezing in the hallway, our cleaners will be exposed to that.’ SSH& is furthermore instructing their employees with cold-symptoms to not come to office at the Laan van Scheut, but to call instead.

Buitenhuis sent further information to all tenants per mail today. ’We are appealing to the moral of our tenants. It is very important to us that they keep us informed and that they keep everything clean.’

11.20 hours. ’It feels as if the Netherlands are behind Italy by two weeks’, says Auke Roos on the phone. The Radboud-graduate is currently doing a master in Milan.

’In Italy, everyone is in quarantine right now. We are only allowed on the street to buy groceries. There are long lines before the supermarkets, because only a limited amount of people is allowed inside at the same time. All other buildings have been closed.’

’Whoever is on the streets anyways, needs to carry a special document stating why he or she is outside. A friend who went out to buy cigarettes in the evening was approached by the police.’

’I find it odd that Dutch schools haven’t closed yet. In Italy, they have been closed for the past two weeks already. I read online that Radboud University has limited the use of workspaces to 99 people at a time. Then one really doesn’t get for what the regulations are supposed to be good for.’

10.47 hours. The construction of the Maria Montessori building is meanwhile continuing. It is not as busy as usual, meaning that approximately 180 builders are currently at work. This amount is much higher than the advised amount of 99 people. 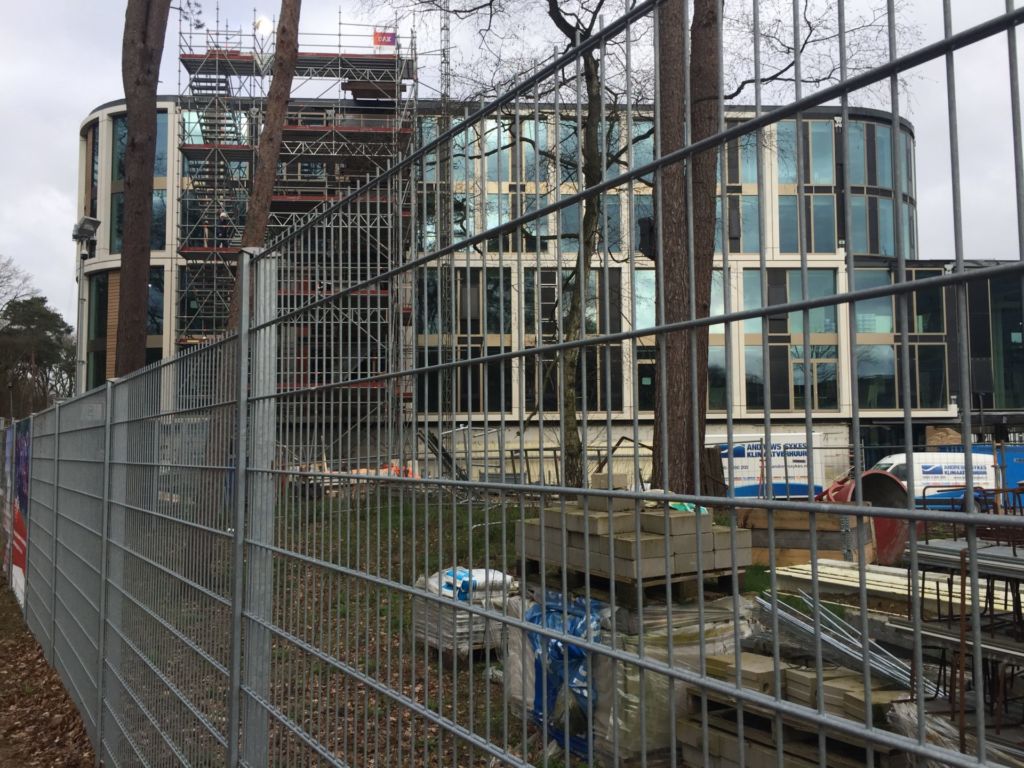 10.34 hours. It’s official now: there won’t be physical forms of education on campus until the 31st of March. Radboud University has just announced that on Twitter.

10.30 hours. The central university library is implementing a strict entrance policy: 90 people per hall may enter. The main entrance is partially blocked and a porter is keeping count. ’As of now, 51 people are inside’, he says. Business Administration-student Iris van Raaij is coming inside just now. ’I have to work on my thesis and I’m working better here than at home. I took precautions, but I also try to uphold my daily rhythm.’

10.25 hours. It appears that there will be no physical forms of education at Radboud University until the end of this month. ’We’re doing our best to implement as many alternative forms of education as possible’, says college chairman Daniël Wigboldus to VOX.

10.15 hours. The corona-regulations are affecting social life in Nijmegen as well. Phocas-activities at the Villa Van Schaeck have stopped immediately until the 31st of March. The amount of people at the boathouse the Haemel will be limited as much as possible.

10.00 hours. In the Albert Heijn at the Daalseweg where also many students are buying their groceries, people have been stockpiling this morning. Toilet paper is sold out, pasta as well. Canned tomatoes are almost gone and the employees have trouble re-stocking the bread.

9.25 hours. The collegezalencomplex is closed as well. Anyone who still wants to get inside has to phone the doorman.

8.00 hours. Education at Radboud University (including exams) has come to a halt today. By doing so, the university is following measures implemented by cabinet in order to prevent the coronavirus from spreading further, based on advice by the National Institute for Public Health and Environment (RIVM). Today, university will release further reports.