The first students of the English bachelor programmes are receiving their diplomas these coming months. Some of them are staying, others are flying out all over the world. What are their experiences? This time: Nastia Nizalova, Arts and Culture student.

Nastia Nizalova (24) from Ukraine was one of the first students that were part of a programme, entirely new at the time, that started at Radboud in 2016: the Bachelor of Arts and Culture in English. Because it was the the first year that this English-taught programme existed, there were several hiccups along the way, she says.

Courses without proper organization, wrong announcements of the amount of exam questions, and courses that were too hard to pass were common things during her Bachelor, she says. One course stuck with Nizalova in particular: ‘History of Arts 1. The way it was organised was a nightmare. We were told beforehand that the exam would consist of a certain amount of questions, but the actual exam had a different amount.’

‘There was no lack of enthusiasm in the professors’

In the end, nobody passed the exam on the first attempt. ‘Almost the same happened with the resit – only one or two people passed. So we all had to retake that exam the next year.’ The language turned out to be a challenge as well. ‘Sometimes we were told that we would have a course in a certain period, but then we didn’t because they could not arrange a professor to teach it. And at other times, our professors did not have the necessary knowledge to teach the course, or the English.’ She recalls that she had to fight for a second opinion of an essay after her professor gave her a low grade because she couldn’t understand Nizalova’s English.

Still, she does not regret doing this Bachelor. ‘Apart from all this, the other courses we had were super interesting and inspiring. The main problem was the organisational part. There was no lack of enthusiasm in the professors. And my study really made me grow as a person.’ For example, before doing Arts and Culture, Nizalova never was very enthusiastic about politics. But while doing her bachelor, she realised that she actually did have an interest in the connection between culture and politics. ‘I would not have found that out without this study.’ 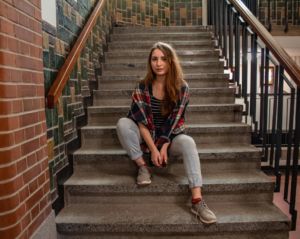 Nizalova is also happy she went to Nijmegen. ‘If you want to study Arts and Culture, Nijmegen is the place to be! There are so many cultural things going on here, but the city is still small enough to be convenient.’

Thinking about her international study experience, Nastia thinks there are some things that are more difficult for internationals than for Dutch students. ‘One specific problem for international students is that we are often perceived as complaining too much. I was told that Dutch students adapt rather than complain if there is a problem. But people forget that Dutch students have the luxury of prolonging their studies without major issues. Their study fee is much lower than for non-EU students like me, and even that fee can be paid by the governmental loan they can apply for. Internationals cannot rely on that,’ Nizalova says. ‘So it makes sense that we want to finish our studies in time and push if there is a problem.’

Would she recommend her bachelor’s programme to future students? ‘It really depends on what you are looking for. If you’re looking for a polished programme where everything is set in stone, then no. This bachelor is still developing and it’s more about exploring yourself and your interests. If you know that and that’s what you want, then yes, definitely go for it here!’