With more than 6.000 renters, SSH& plays a big role in the Nijmegen housing market. But every year, the time-restricted contracts the student housing cooperation is working with contribute to a temporary clogging of the housing market. One consequence: students who are left without a roof over their head after their contract expires.

SSH& is, with more than 6.000 renters, the largest housing cooperation in Nijmegen. And with renting to everyone from bachelor student to PhD candidate, degree-seeking or on exchange, in Nijmegen and Arnhem, the company contributes massively to affordable housing for students.

Most students renting with SSH& are able to live in their room or apartment until graduation. But that is not the case for everyone. The reason is so-called short-stay contracts that SSH& is working with, used to rent out rooms for a limited amount of time, often six months or a year. Unlike regular contracts, however, short-stay contracts are not protected under Dutch rental law.

One result of that is that short-stay contracts cannot be cancelled on a monthly basis. This gives rise to two issues. On the one hand, students can run into (financial) problems when looking for a new room. On the other, the contracts contribute to a clogging of the housing market by increasing the number of students looking for a new place at the same time.


According to Marie-Sophie Simon (asap), this might not be a problem for exchange students for whom the contracts are primarily intended. But for degree-seeking international students (receiving the same contracts during their first year when they still receive help in finding housing from the university, ed.), this can be an issue. ‘Those contracts can only be quit two months before the half-year mark’, explains Simon. ‘So, if you move in in August, you ought to know in November whether you can move to a private long-term place in January. And that is basically impossible.’ 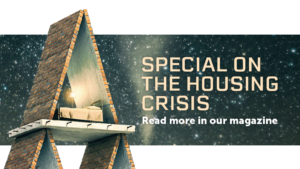 The contracts are not necessarily a bad thing says Roel Veenstra (AKKUraatd): ‘I’m happy that SSH& at least wants to help students by offering them one-year contracts.’ However, both party representatives agree, the inability to terminate early feeds into a bigger issue: by the time the one-year contracts run out in summer, new Dutch and international students are also looking for rooms. ‘So, within a short timeframe, you have three really big incoming student groups that want to find housing,’ explains Veenstra. Contributing, in the end, to a clogging of the housing market.

Following SSH& manager of strategy and living, Marco Schoofs, SSH& is not intending to change their contract policy for degree-seeking international students in the near future. ‘The short-stay contracts are meant for a period of half a year or a year. In that period, a student who wants to stay longer in Nijmegen can seek for a place to live on their own.’

Something that, according to both Veenstra and Simon, is not always that straight-forward, often resulting in students having to pay double-rent until their short-stay contract runs out. ‘A student can’t afford that’, Simon explains. As a consequence, students are often forced to wait until their contract expires before they can search for new housing. Something Simon has experienced herself: ‘I was kicked-out of my SSH& room in August and ended up homeless for five weeks.’

According to Jaap Dammingh, professor at the law faculty and expert in Dutch rental law, while those short-stay contracts are legal, they are also in a grey area. ‘Tenants are protected quite strongly under the Dutch rental law, but that doesn’t apply to contracts for short-term use. But it is not necessarily said that a judge would rule the same way.’

‘Tenants are protected quite strongly under the Dutch rental law, but that doesn’t apply to contracts for short-term use’

Dammingh, however, negates a possible change in the near future. ‘For now, the important thing for international students when signing a contract for short-term use is that they are aware that there is a high likelihood that they will not be able to terminate it before the ending date.’

It is still unclear to which degree short-stay contracts will take a central point on AKKUraatd’s agenda in the future. ‘But I would find it illogical if we don’t follow up on this’, according to Veenstra. According to Simon, an awareness programme about short-stay contracts is beyond the political scope of asap, but, together with AKKUraatd, the party has engaged in conversations with the Works Council and the Executive Board. ‘It turns out’, so Simon, ‘they were apparently not even aware of the fact that international students get these kinds of contracts.’