Home » English » No ready-made solution for increased workload: ‘We have to do this together’

No ready-made solution for increased workload: ‘We have to do this together’

The already high workload of university employees has increased even more during the coronavirus crisis. During the online New Year's meeting, the Executive Board promised to look for solutions. President Daniël Wigboldus also announced that sustainability will play a greater role in education.

The empty and silent auditorium on campus from which President Daniël Wigboldus gave his New Year’s speech was symbolic of the past year. Sometimes he seemed to hesitate briefly, unsure of which camera to look at while telling his more than five hundred listeners via a live connection about the past year, which was dominated by the corona crisis. But he also looked ahead to 2021, when the university will try to throw off the shackles of that same crisis.

The fact that corona has had a major impact on the staff and students of the university was evident from the short message from Vice President Wilma de Koning from the new Maria Montessori building, to which the switch was recently made. ‘How hard we have worked over the past year,’ she said. ‘And the workload was already so unbelievably heavy. We wanted to do something about that in 2020, but we did not manage to.’

According to De Koning, the latest staff survey shows that the workload has increased even further during the corona crisis. She did not present a ready-made solution for this, but did, however, promise that a committee would be set up among the staff in order to look for ways to take the pressure off in times of distance learning. ‘We have to do this together.’

Working from home
If it is up to the university employees, they will continue to work from home even after the corona crisis. Sixty-five per cent of employees say they want to work from home at least one or two days a week. President of the Executive Board Wigboldus would like to encourage this, because it would lessen both the traffic to the campus as well as the necessity for office space.

And that is necessary, because the coronavirus crisis will leave its traces at the university, even when students and employees are able to return to campus in the course of the year. Why should knowledge clips and digital lectures, which have taken off in such a way, not also play an important role in education after the corona crisis, Wigboldus wondered in his speech. ‘And shouldn’t we start thinking about testing differently and the importance of testing?’ It is precisely this digital testing that was a hot topic in the past year because some students saw their privacy being affected by digital surveillance systems during exams, which will also be used again in the coming semester. 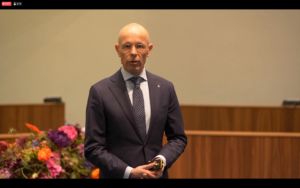 Corona has thus permanently changed the form of education, and now the Executive Board also wants to adjust the content of the education. At the moment, every student at Radboud University is taught philosophy, and the board wants to make sustainability a mandatory subject as well. Students, the ‘designers of the future’, will ‘learn to critically reflect’ on how people can live together on earth in a healthy, sustainable way. Wigboldus states that it is ‘not just about the environment, but also about the way in which we interact with each other.’
In the coming year, as soon as the measures permit, the college plans to talk to students and staff about how the university wants to shape its identity now that it has lost its ‘Catholic’ designation. It is doubtful whether a lot will really change, according to the words of the President of the board. ‘I attach great importance to expressing how proud we are that we are a university that emerged out of the Catholic emancipation movement at the beginning of the last century.’ It is clear that the Church has said goodbye to the university, but the university not yet to the Church.

Hermesdorf prizes go to Radboud university medical center
This year, during the New Year’s meeting, the Hermesdorf Prizes were again awarded to scientists whose work has had a significant social impact over the past year. The 2020 winner is the Covid-19 team from Radboud university medical center, which includes infectiologists Mihai Netea and Frank van de Veerdonk, and hospital pharmacist Roger Brüggeman. Among other things, they are investigating whether the BCG vaccine, which is used against tuberculosis, can play a role in the fight against the corona virus.
‘When the pandemic broke out, these researchers turned their research around in order to find solutions for society,’ said Rector Han van Krieken in a laudatio. President of the Executive Board Daniël Wigboldus said it was inspiring that the prize did not go to one person, but to a team. ‘As far as we are concerned, team science and recognizing and appreciating the different contributions of everyone will occur more frequently in 2021.’
The Hermesdorf Talent Prize went to researcher Charlotte Bekker of Radboud university medical center. She has developed a method to prevent the waste of unused medicines, such as anti-cancer medicines. Although there is a lot of resistance to this in the medical sector, Bekker set up a project group that will conduct a worldwide trial in four hospitals next year.
The Hermesdorf Prizes are named after Bernard Hermesdorf, the rector who closed the university in 1943 in protest against the policies of the German occupiers.