Home » English » These athletes give their best for their timeline

These athletes give their best for their timeline

Many cyclists care a lot about setting good times in Strava. These Nijmegen based sports fanatics, for example, do everything they can for being named as King (or Queen) of the Mountain.

In 2016 Joost van Wijngaarden put his Communication Sciences studies on pause to try and become a professional cyclist. ‘It turned out that I wasn’t good enough, but I’m glad I gave it a try,’ says Van Wijngaarden, now lecturer at HAN University of Applied Sciences and organiser of sports events.

Strava is popular as a training logbook among runners, cyclists, skaters, rowers and swimmers. At the same time the app, released in 2009, also forms a social network where other users can like and respond to your training scheme. Strava offers insight not only into your own sports performance, but also those of your friends or other athletes you follow.

It was during this period that he achieved his KOM (King of the Mountain or best time among all Strava users ever) title on the Oude Holleweg, with its 910-metre climb and a slope gradient of 7.4 the most feared hill of Nijmegen and surroundings. But not for Van Wijngaarden, who went at it at 32.4 kilometres per hour. ‘I had left my bidons, spare tyre and pump at the bottom of the hill to be as lightweight as possible. And it worked. It does feel a bit like having a Dutch record. It often crops up in conversation with other athletes.’

Strava has changed his approach to exercise, says Van Wijngaarden. ‘For example, I’ve linked Strava to the VeloViewer app. It’s an app that divides the world map into areas of 1.5 by 1.5 kilometres that become coloured once you cycle them. In an effort to colour in more areas, I’ve discovered so many beautiful places in Germany, Brabant and the Veluwe.’

When he was still riding races, all the statistics sometimes came at the expense of pleasure. ‘Since then, I’ve started looking around me and enjoying myself more. I don’t care about my average speed. But if I come home after a ride of 3 hrs and 59 minutes, I do ride to the end of the street before I stop.’

Manon Gremmen: ‘Those statistics can also have an adverse effect’

Master’s student in Biomedical Sciences Manon Gremmen enjoys cycling, running and marathon skating – performing just under the Dutch sub-top in the latter discipline. She uses Strava to keep track of her own statistics in these various sports. ‘When I upload something myself, I check on my feed to see what other people are doing, but I’m not overly preoccupied with it. I don’t keep track of the kudos, but I enjoy my father’s friends complimenting me on a good run.’

Whenever possible, the President of the Nijmegen Student Cycling Association Mercurius prefers to cycle abroad. On a cycling holiday in the Eiffel, she collected quite a few QOM (Queen of the Mountain) titles. ‘It’s fun to see afterwards that I’m the fastest woman on a hill. After a while it turns into a challenge. If I don’t end up first on a segment, I will put in extra effort the next time. On a holiday in the Alps, I even got a QOM on a descent where a few days earlier I’d spent the whole time braking. But as a rule, I’m more interested in distance and heartrate zones.’

Last year, Gremmen’s goal was to cycle 10,000 kilometres, a goal she managed to achieve. But all those statistics can also have an adverse effect, she says. ‘At some point I became quite competitive about skating and I was a bit too keen on burning calories – a problem many female athletes face. I decided to exercise less for a while, and made sure that I was eating enough. During this period, I also used Strava less.’

Tom Wever: ‘A KOM on the cycle highway is extra fun’

Late December last year, something was bothering Tom Wever, physiotherapy student at HAN: he had only cycled 14,500 kilometres in 2020. ‘And 15,000 kilometres is of course a much better figure. So I went for a few extra rides on my bike.’

Since joining the Nijmegen Student Cycling Association Mercurius, Wever has become more competitive about cycling. As a cyclist focused on racing, he’s become more aware of his distance, speed, capacity and heartrate. ‘It allows me to see in real time how fit I am.’ Wever has a few KOMs (King of the Mountain) to his name. Among others in the Achterhoek village where his parents live, and on the cycle highway that joins Arnhem and Nijmegen. ‘The latter is, of course, extra fun, because so many people cycle there. The fact that I rode my top time in the middle of a storm with strong gusts of wind doesn’t matter.’ Wever calls himself a safe cyclist, but to achieve a record time, he sometimes takes calculated risks.

‘If you’re riding 50 or 60 kilometres per hour on a straight road, you can give other road users a scare.’

As he cycles, he sometimes thinks of a fun name for his Strava ride. It has to be something funny or an inside joke with other members of Mercurius. He’s not bothered about kudos, he says. ‘Except when I post pictures of a beautiful ride. Then it’s a pity if nobody likes them.’ 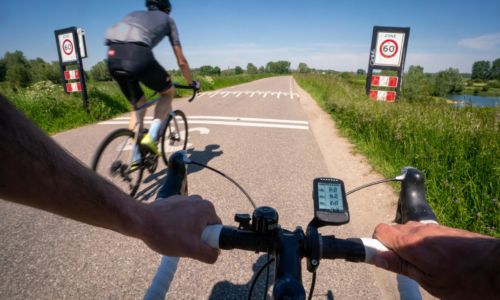 What ‘kudos’ can do for your motivation and sports pleasure